5 Examples of Influence Marketing in the Manufacturing Industry

As a sector of the economy that produces finished goods, the manufacturing industry needs to be a money-maker.

From cars, food and beverage, industrial/engineering equipment, to fashion and beauty – if it’s manufactured, then it needs to be marketed.

While the manufacturing processes and methods of production may remain largely the same for any company, the marketing is not and should not.

In this modern day, to embrace innovation to speed up processes or advance business strategies, seem to be the change manufacturing industry needs.

It’s the influence that gets you not just customers, but a community of loyalists and advocates.

Here are 5 examples of how influence marketing can level up in the manufacturing industry:

For the non-members of the millionaires club that belong to the majority of the population, buying a car means many factors are considered.

Luxury may or may not be one of them.

So for a car with a hefty price tag, the perception of luxury follows.

When a luxury car can be anything but sporty, that image is very limiting.

That was the perception Acura wanted to break free from for its TLX. This is a challenge you just don’t leave to your dealership to solve with a sales talk festival.

When you’re dealing with perception, the purchase decision is never easy. To influence that decision, Sensei Marketing designed #TLXExperience for Acura, leveling up the test-drive strategy with a race track experience.

Influencers, known drivers of competitive vehicles were acquired and managed “to generate first-hand experiences and recommendations across multiple platforms.” But their experience was leveled up by pairing them with professional race car drivers for an on-course race. And to record the thrill, influencers were made to wear Fitbits to track their heartbeats while experiencing TLX on the track.

The one-day event generated millions of impressions all over Canada and earned media of more than half a million dollars. Bottom line, a perception change. Those influencers lived out the campaign and became Acura customers.

Market research has shown the potential of beauty products to reach USD 863 Billion by 2024. In a selfie generation, much of this will be fuelled by millennial spending.

The fastest route to this market is no longer a traditional advertising strategy, where lifestyle magazines draw and define beauty models from a narrow standard.

The era of social media has changed the traditional buying journey for beauty products and threw down a dictatorial model beauty narrative for consumers, especially women.

That’s the revolution that Glossier engendered, a people-powered beauty ecosystem.

As Glossier enabled conversations between and among women, they get them involved in marketing their products. “Skincare and beauty inspired by real life” is their campaign tagline.

Using earned media from their customers, they make their consumers talk to each other, which is where influence marketing all begins.

Emily Weiss, Glossier CEO believed that beauty is an element of personal style that it needs personal conversation to sell it. In the company’s homepage, she was quoted as saying: “It has historically been an industry based on experts telling you, the customer, what you should or shouldn’t be using on your face.”

In their homepage is Into the Gloss, a website devoted to people to share the beauty products they love, routines and best tips and tricks from makeup and hair to health and wellness both for men and women.

How can a manufacturer and distributor of cleaning products for touchscreens and devices be among Canada’s fastest growing manufacturing firms in terms of revenues?

Whoosh! is twice on top of the list, 2017 and 2018, because it simplified conversation of tech hygiene like an essential cleanliness habit.

This Toronto-based start-up manufacturer of natural cleaning products from screen wipes, screen shine sprays, and microfiber cloths, been growing since 2012, with a revenue of $2-5 million.

Aside from featuring relatable content for marketing by using a tone and voice from a common man’s everyday conversations, micro-influencers did it for Whoosh! 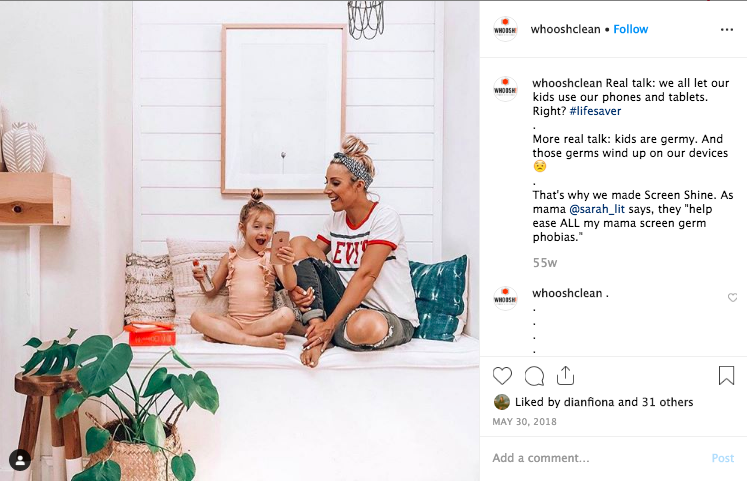 While they use common people to drive their message of cleanliness as every day and everyone’s business, they are also quick to jump into opportunities to showcase their products even in the most unlikely possibility, a sports talk show on tv!

Our newest fans: the @nbaontnt team! @Shaq, @thejetontnt, Charles Barkley, and EJ 🏀 . We caught Charles Barkley licking his phone on TV and had to intervene. So we sent the crew some Screen Shine ✨ . Thanks for the love, @nbaontnt! 😎

Experience with the brand and interaction with it – either actual or word-of-mouth, create a mental picture of the product that entails thoughts and feelings.

And changing that also needs the same, and that takes some influencing work.

With an influencer marketing strategy at play, a peer-to-peer group was formed and a platform for their community was created.

While ECHOMeansBusiness.com is the platform where the community of grounds, tree maintenance, and lawn care professionals can find tool information and resources to help members grow and operate their businesses profitably.

While food and beverage usually lumped in the retail industry, it’s very much in the manufacturing ward. They fall under “fast moving consumer goods” as they are regularly purchased and consumed quickly by consumers.

So in this broad food and beverage manufacturing category, are the brands. Branded food and drinks carry the name, reputation, and story of its producers – so much so that for most, it becomes their identity.

Influence marketing is ingrained in the business strategy of most food and beverage manufacturers. It’s so commonplace that paid partnerships are no big deal to consumers nowadays. Product endorsers acquired “the influencer” title overnight.

But what about creating influencers among your consumers?

How many would be willing to do it without pay?

A lot, big enough to be a community – or a DEWnation. That’s how Mountain Dew turned their consumers to advocates.

The journey of these loyal fans was in influence marketing strategy by gamification.

In a nutshell, Mountain Dew harnessed the power of crowdsourcing, in a promotional campaign.

DEWmocracy became a series after its phenomenal success. It rallied fans around new flavors of the drink that the consumers themselves designed.

Gamifying the experience, consumers became loyal fan base behind their choice of flavor and voted it to become the next flavor in the Mountain Dew line.

This increased the social media presence of Mountain Dew and built a fan base for long-term brand engagement. At the same time, it helped the company’s product development efforts.

The DEWmocracy campaign was no more than a crowdsourcing strategy-turned influence marketing.

It is a marketing campaign that continues to stand out long after it’s done and gotten over with.

How to retain anything in memory, gamification works each time. I learned that from how I studied the DEWmocracy campaign in a Web Mining and Analytics class.

Our professor made 2 groups in the class compete in discussing and presenting this DEWmocracy, among other marketing campaigns.

It was the competitive spirit in the groups that made us really learn that topic by heart.

The class voted for the best presentation, through a game-based platform Kahoot.

My professor said it was the first time in the history of that course that there was a tie.

Update, now in Sensei, I am now working with a classmate from that group I competed and tied with.

And our boss – our professor for the Influence Marketing course at Seneca College.

There are many ways to sell a brand. For the manufacturing industry, it takes more than a name and a story to make a good reputation stick. But it takes influence to get ahead.