In the world of influence marketing, we can break the types of influencers into six categories – Mega, Macro, Micro, Advocates, Referrers, and Loyalists.

While these titles may seem like buzzwords, they’re actually important and effective breakdowns of the different types of influencers, especially when it comes to their audience.

Without segmentation like this, any influence marketing campaign stands a higher chance of failure, because then it becomes a one-size-fits-all approach.

While this may work for a while, especially if you have a huge marketing budget to throw around, it won’t last.

Instead, your campaign will fall short on its goals, the influencers won’t drive the results you hoped to achieve by working with them, and you’re no closer to the audience you’re trying to reach.

This isn’t a new concept, or groundbreaking advice – my colleague Sam Fiorella and I were speaking about this almost 10 years ago, as we researched for our influence marketing book. And yet…

We’re still seeing agencies, businesses, and campaigns that aren’t differentiating influencers, and then wondering why their results are so poor.

So let’s break down the 6 types of influencers, and why it’s important to not only separate them, but build a strategy around each.

According to Gil Eyal, CEO and founder of influence marketing platform HYPR Brands, a mega influence is defined as being,

…more famous than influential. They aren’t necessarily subject matter experts, but they definitely provide a lot of reach in one hit.

An example of this would be Kylie Jenner, who Forbes named as “America’s youngest self-made billionaire” earlier this year (although many question the “self-made” moniker, given her family association with the Kardashians).

With 138 million followers on Instagram, Jenner is reputed to charge up to $1 million per sponsored post or advertorial when working with brands.

While a million dollars is a lot of money for one post, mega influencers (and agencies that promote them) would argue that the reach offered is worth it.

The problem here, though, is that mega influencers are operating with a one-size-fits-all mindset, and an approach that old school marketing took – throw enough at the wall, and see what sticks.

Jenner’s post may have received over 10 million Likes, but how many of these would be customers for your brand?

Additionally, as the now-infamous FyreFest proved, working with mega influencers can backfire spectacularly and cost you more money than the original fee for the influencer.

When to use mega influencers: Awareness campaigns where a broad reach is required to get your service or product in front of as many people as possible.

Macro influencers can be podcasters, vloggers, social media stars, and influential bloggers. Their audience size would normally be between 100,000 and a million followers.

A good example of a macro influencer would be social media blogger Chris Brogan. 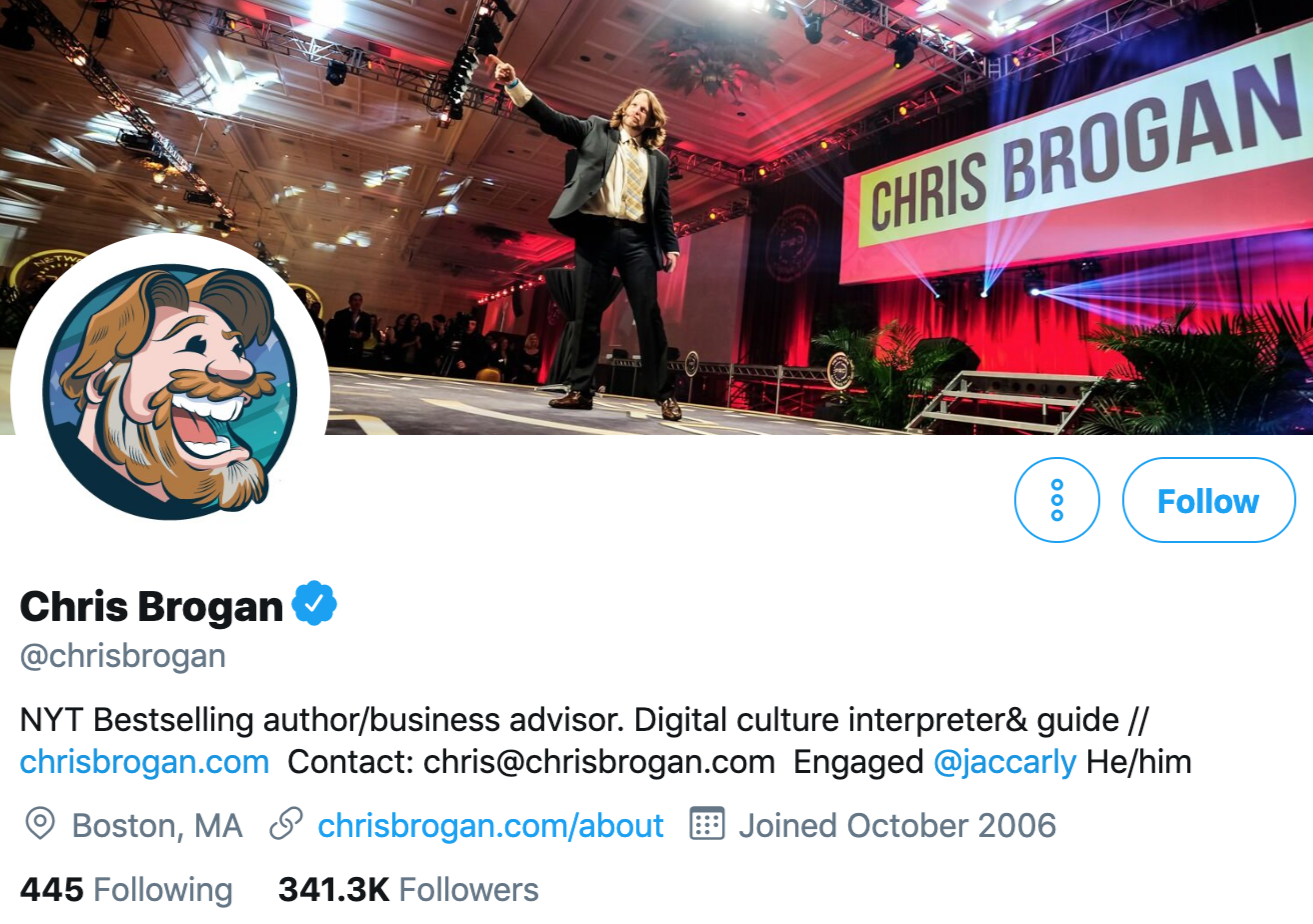 Brogan made his name as an early adopter of social media, and talking about how this new medium could be used to connect consumers and businesses.

His blog helped him grow his audience as other early adopters recommended both him and his content, and that audience has continued to build today.

When to use a macro influencer: When you want to dive a little deeper into your audience based on topic, but are still in the awareness stage of your campaign and looking primarily for reach.

When you’re ready to move your influence marketing campaign from an awareness tactic to a more defined one, you need to start looking for more effective methods of communication/promotion.

While mega and macro influencers can still impact results at this stage, this is the time when you would work with micro influencers.

This type of infleuncer’s audience ranges from 1,000 to 100,000 followers – however, while their audience may be smaller, they’re more invested in the influencer and their niche.

Micro influencers are respected because of their expertise on a topic – they usually stick to one topic, and leverage their knowledge to build their thought leadership.

Because of this, micro influencers are far more effective at driving the action(s) your business is looking for to meet an influence marketing campaign’s goals.

Sensei Marketing client ECHO USA is a good example of this approach, with the ECHO-sponsored ECHO Means Business platform, and its User Advisory Group (UAG). 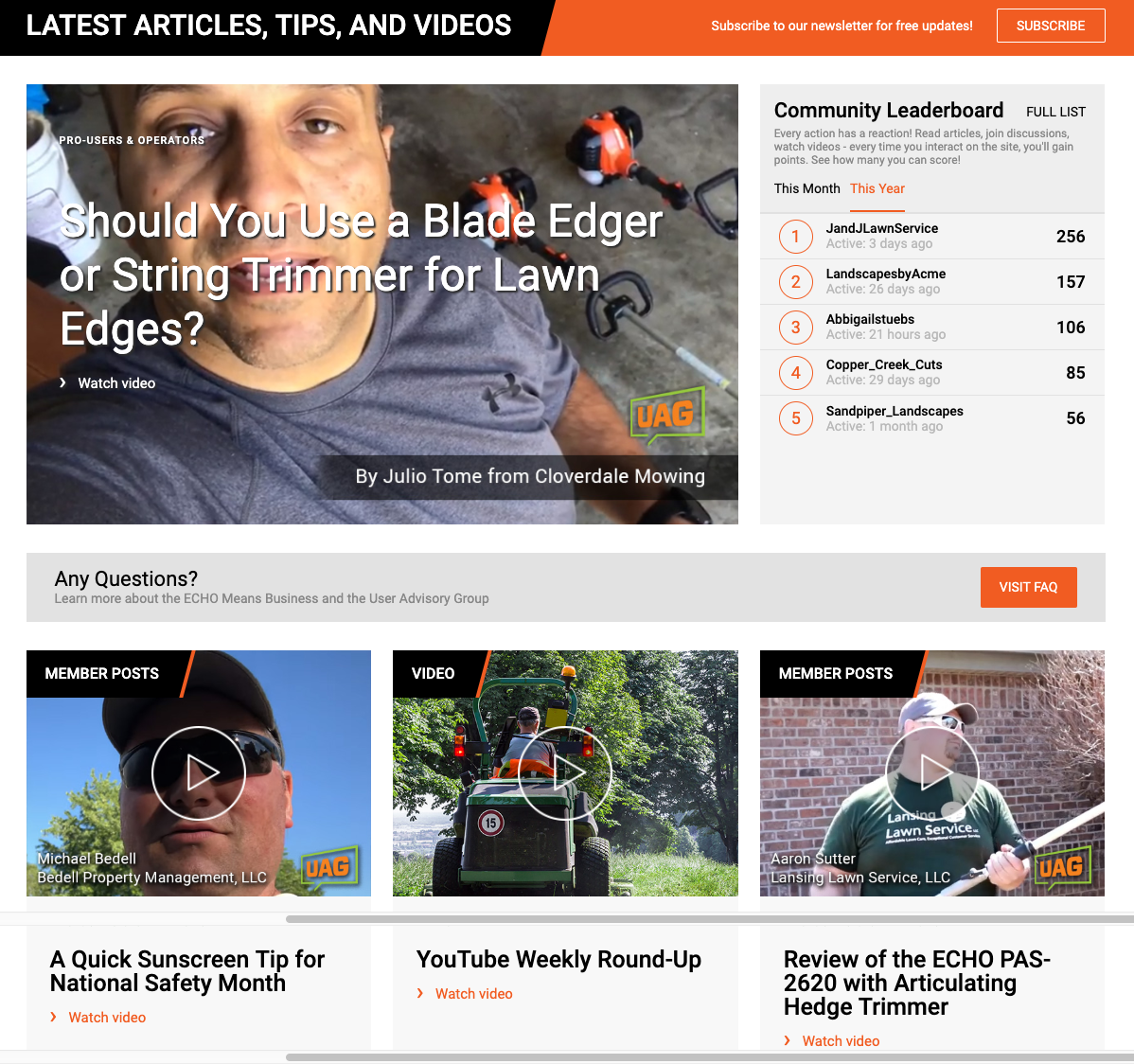 Instead of using the simpler approach of using social media influencers with huge audiences, ECHO Means Business uses a mix of outdoor power equipment (OPE) professionals to share their expertise and insights.

Indeed, some of them are only starting out on their social media journey, which is fine – it’s their experience, and how they can further help the community in general grow their business.

This has resulted in a highly engaged, industry-respected program that has changed the conversation around ECHO and its products.

Once you have your influencers working for you and the goal(s) you’re looking to achieve, it’s time to start thinking beyond the awareness stage, and more directly into the lead stage of your campaign.

Driving leads can definitely happen in the Micro Influencer stage, but when you take the expertise and trust that’s built through micro influencers, they can both turn into Advocates as well as create them.

Advocates are a special category of influencers.

They are people who speak about your brand positively, either through use of a product or service, and will jump into conversations around your brand to either promote or defend.

A great example of this is Planned Parenthood. While they may create extremely divisive audiences online, they have legions of supporters that will defend them in conversations, and promote important facts about their services to do so.

Founder of online parenting resource Pretty Extraordinary, Danielle Elliott Smith is an influencer with a sizeable community that advocates for her content and its messaging.

However, she can be a powerful advocate herself, as she showed when it came to her personal experience with Planned Parenthood (PP) as a young woman.

Not only did Smith open up and share a very raw and personal account of how she almost died, and how PP saved her life, she also listed, in detail, all the services PP offers, that detractors either didn’t know about, or chose to ignore.

The result was a large amount of traction online, donations to PP, and people opening up about their own experiences with the organization, encouraging others to seek help.

These kind of results show why these types of influencers are so key at both delivering a message, and driving awareness and reach of it.

The next phase of influencer marketing is one that many businesses will already be aware of, even if they don’t think they’re currently using to their advantage.

The Referrer is someone that drives people to your website, place of business, or online profiles, with a solid and trusted recommendation for your product or service.

You’re the only brand they will recommend (or, if they’re comparing with a competitor, will still recommend you as the first choice).

These types of influencers are the equivalent of lead magnets, or Marketing Qualified Leads (MQL), as their recommendation is immediately trusted, and acted upon.

A good example of this is the open source software WordPress. 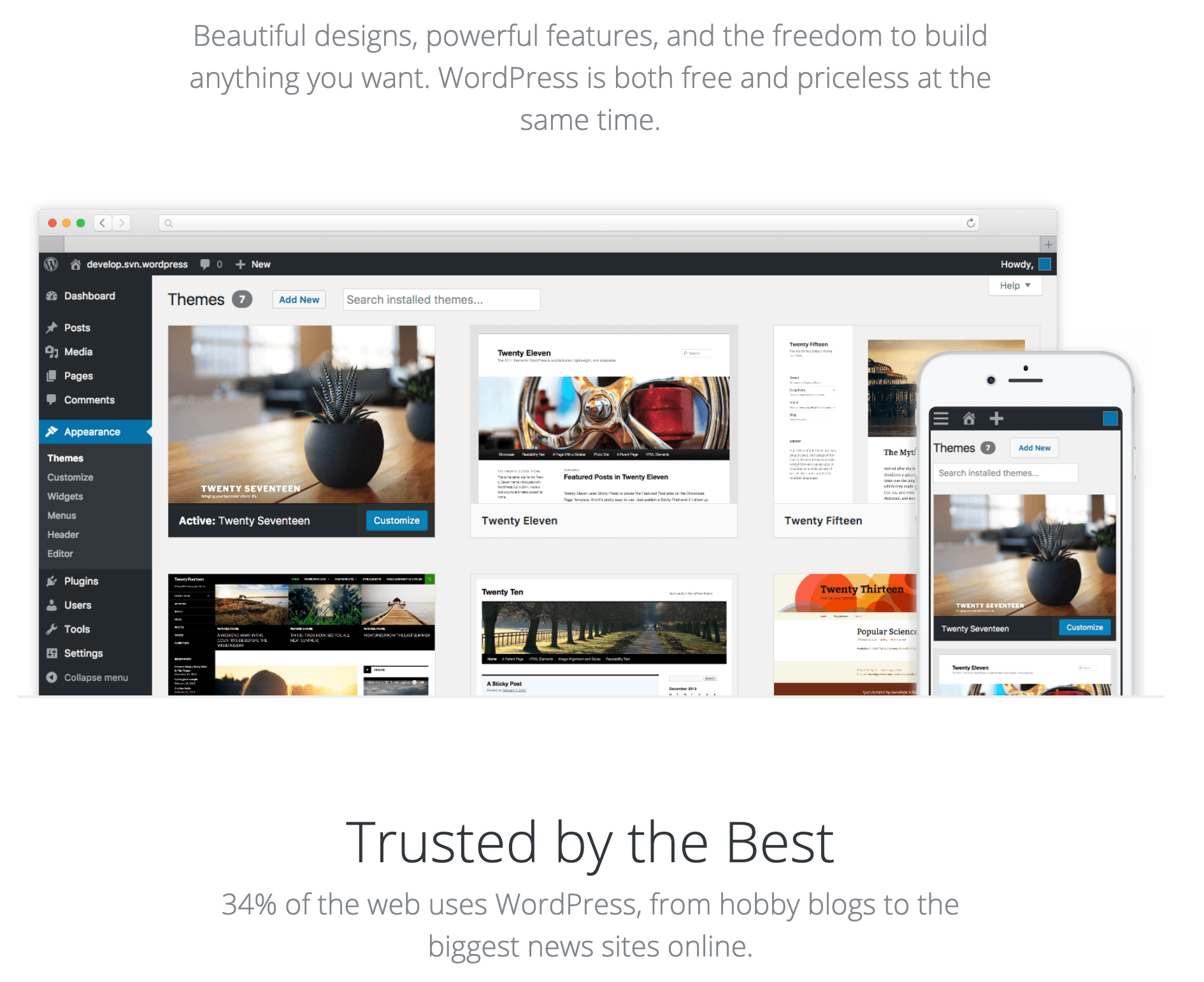 From its early days as a hobbyist blog platform, WordPress now powers more than 1/3 of the world’s websites, and continues to grow that number annually.

When people ask their peers and connections on social media what’s the best web platform to use, the overwhelming response if WordPress.

These referrals – as well as the open source nature of the platform allowing for endless optimization – has given WordPress an army of leads for their platform, and one that also correlates to Advocates as well as Loyalists when it comes to influencers.

The Loyalist – The Most Important Types of Influencers?

The final piece of the types of influencers puzzle comes in the shape of Loyalists.

These are followers, customers, fans, etc., that have moved all the way along the influence marketing sales funnel, from the awareness that Mega can drive, to being with your brand through thick and thin.

Loyalists are built from consistent support from, and involvement with, your brand. These are people that have grown with you, and supported you, and bought into your message completely.

A great example of this is The Friendship Bench, and its associated #YellowIsForHello campaign. 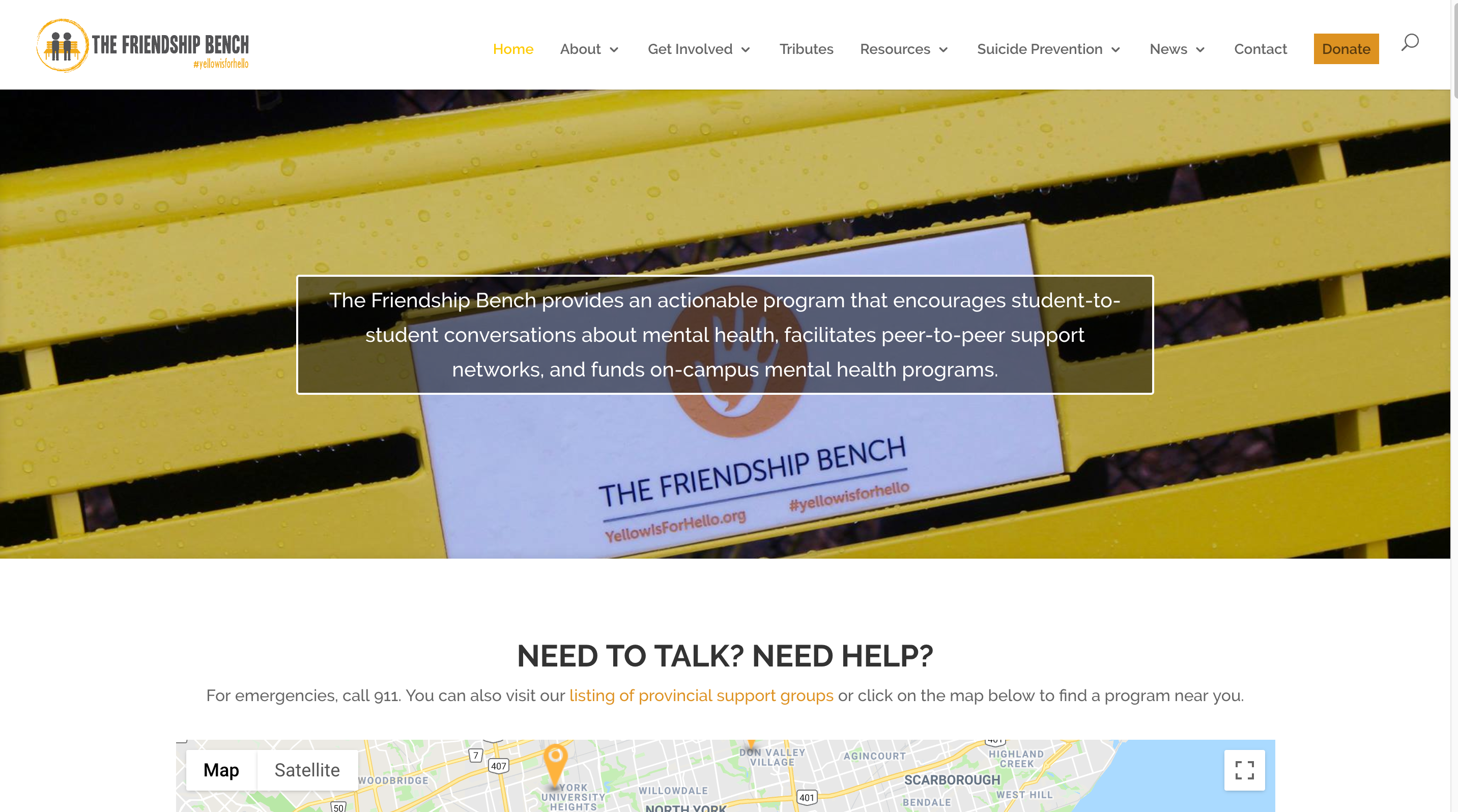 Co-founded by myself and my two colleagues here at Sensei Marketing, Sam Fiorella and Robert Clarke, The Friendship Bench is now in its fifth year.

Started from a personal tragedy, the program enables and supports peer-to-peer connection between students with mental health issues.

By utilizing an iconic yellow bench that acts as a visual reminder to talk about your mental health, campuses that have the bench program installed have seen a rise of almost 20% in students coming forward to talk.

Last year, the program started to suffer as it grew, and more schools and faculty came forward requesting a bench, or for Sam to speak at their school.

The amount the 100% volunteer program needed to scale to meet this demand wasn’t in place and, as such, communications from us were a bit hit and miss.

Despite this (perhaps because of this), our community stepped up and supported us, and continued to share and promote the program even while we were trying to scale.

This ensured our reenergized and refocused goals moving forward had an active and receptive audience, as our Loyalists who continued to help us, and be there for the program, continued to build our target audience.

Over the last 20 years in the Marketing field, Danny has delivered results for some of the biggest organizations in the technology, digital and consumer industries including Ontario Lottery Gaming Corporation, BlackBerry, British Telecom, Orange, Microsoft Canada, IBM, Ford Canada, FedEX, Scotiabank, Vodafone, Dell and LG Electronics. He is the co-author of “Influence Marketing: How to Create, Manage, and Measure Brand Influencers in Social Media Marketing” from Que/Pearson, as well as the author of three other books including “The Parables of Business”.