I’ve often said that social media is essentially a mob-in-waiting, a collection of digital avatars waiting to wage war on behalf of the armchair critics who pull their strings. This self-appointed, crowd-sourced global watch dog works well when championing social causes and shedding light on social or political injustices. However, there’s another side to the coin.

Social media works like organized chaos. At the best of times, it walks on the edge and pushes us to think, question, and innovate at a speed that may not have been possible previously. However, as with any chaos, the energy exerted can just as easily, and inexplicably, turn into a negative force.

A month does not pass without us seeing some variation of this online. Recently, a friend posted a video on Facebook that was accompanied with a rant and her pledge to boycott the popular Canada Goose brand of outerwear. The Canadian-gone-global firm manufactures and sells effective, yet fashionable, extreme-weather outerwear, including jackets, vests, hats and gloves.

Canada Goose’s iconic parka features a coyote fur trim around the hood, which has created a lot of controversy. There are no coyote farms in Canada so critics point to the fact that coyotes must be caught in the wild and that the method of capture is brutal. Therefore, they say, we must all boycott the brand.

Warning: Video contains graphic images that some will find disturbing.

The video itself is a collage of homemade movies of coyotes caught in bear taps and  shot by hunters. The producer of the video added a Canada Cruel logo, designed to mimic the Canada Goose logo that is prominent on the garments, in order to suggest that this is the manner in which Canada Goose gathers the fur trims used in its parkas.

This was all it took to ignite the social media mob. Without questioning the source of the video, the intent of its producer, the facts or the policy of Canada Goose, masses of people jumped on the bandwagon, criticizing the brand and calling for a boycott. The outrage seen across social media channels was fervent; people who had never before given a second thought to the welfare of coyotes took out their pitchforks, chanted, and marched across the social airwaves in protest. Web sites, Facebook pages, and Facebook groups sprang up to provide the mob a place to sharpen their weapons, grab a quick beer, and be on their merry way. Bloggers and the news media picked up the story and spread the vitriol, despite the company’s stance. From the company’s policy statement:

Canada Goose only purchases fur from certified Canadian trappers, and the trapping of fur-bearing animals is strictly regulated by the provincial and territorial wildlife departments in Canada. In fact, Canada is the world leader in humane trapping methods, providing the scientific basis for the Agreement on International Humane Trapping Standards (AIHTS), which establishes the required standards for approval and certification of animal trapping devices.

Coca-Cola Courted the Chaos – and Lost?

Another recent example is the passionate mob that formed across social channels after Coca-Cola aired its Super Bowl commercial in which “America the Beautiful” was sung in different languages. It was an effort to celebrate the diversity that America – apparently – connects with so passionately.

After all, Americans often point to the Statue of Liberty as a beacon for what the country represents.  Depicting Libertas, the Roman goddess of freedom, the statue is promoted as a welcoming signal to immigrants arriving from abroad. Freedom, liberty, and a welcoming embrace to immigrants – the marketing team at Coca Cola were brilliant right? What can go wrong with playing to the very culture of its audience?

Nothing if you don’t factor in the nature – and power – of the social media mob. Almost immediately, those who took offence to the song being sung by people of different ethnicities and in different languages turned to Twitter to criticize the commercial, calling for boycotts using hashtag “#BoycottCoke.” 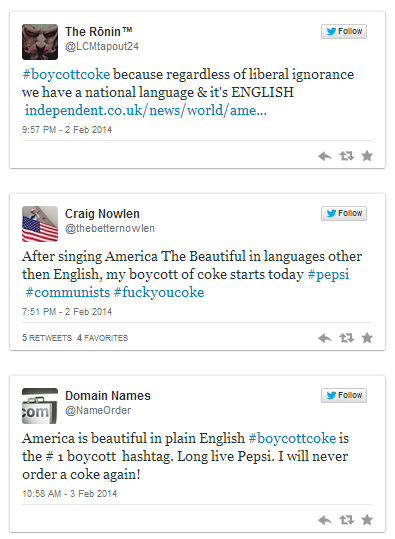 Not to be outdone, a Fox News anchor threw in this gem. By aligning the commercial to a political hot button like the Mexico-US border and immigration, he knew he’d stir up a hornet’s nest.

In the following days, the blogosphere caught fire with anti-Coca Cola sentiment and news sites including NY Daily News, USA Today, Mediaite, Time, and the Huffington Post were all posting articles about the furor. America the beautiful indeed.

One of the challenges marketers have today when creating branding or lead acquisition campaigns is how to properly map and predict the social media mob. How will it react? What are the political, social, or economic undercurrents that might ignite the ire of the  mob?

Those who understand those undercurrents and how they will disrupt any influence and brand marketing initiative sometimes court the controversy. Either way, these cases demonstrate the fact that the mob mentality is thriving, thanks to social media.