There’s no disputing the fact that customer testimonials are critical to a business.

They build trust in the brand and product, they establish credibility, and they provide the social proof that buyers seek when making purchase decisions.

It’s the “bread and butter” component of lead acquisition and conversion strategies; however, few plan, execute or leverage them successfully.

While many firms have loyal customers (or even advocates), not all acquire or capitalize on that fact.

Something as simple as asking for positive reviews from advocates is often overlooked. And when asked, few are used to maximum effect.

So, below I’m detailing three unique examples of brands that have utilized customer testimonials effectively as part of their influence marketing strategies. The first is my personal favourite (OK, it’s one of my favourite whisky’s so I’m completely biased here. I may or may not have been enjoying a dram while writing this article).

In 2015, one of Scotland’s most infamous – and most debated – distilleries celebrated its 200th anniversary.

Like other whiskies from the Islay region, Laphroaig’s flavour profile includes the smoky smells and taste of a campfire developed when the barley used to produce the whisky is dried over the burning of peat.

The resulting smokiness makes this whisky both one of the most hated and loved single malt whiskies on the market. 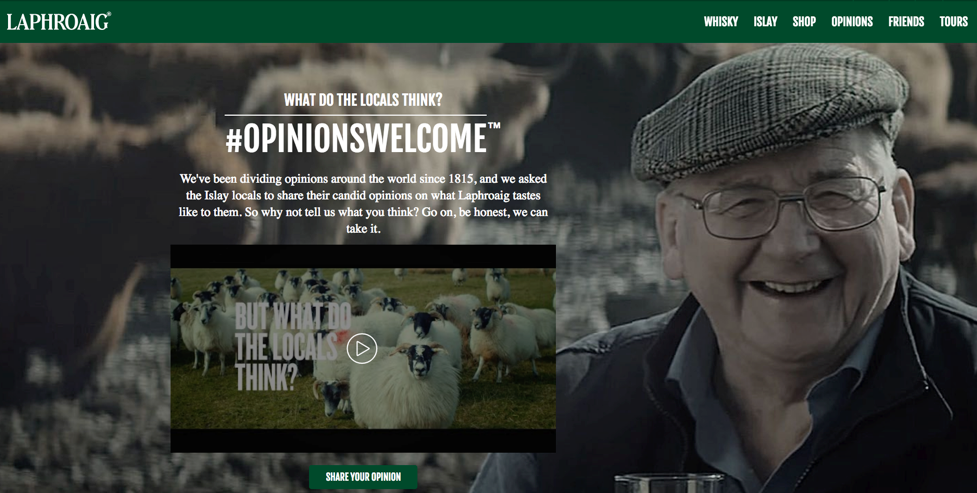 That divide is both good and bad. The good news is that when you have such die-hard fans, it’s easy to generate customer testimonials and recommendations. The downside is that the more fervent one half of your audience is, the other side is often just as, if not more, fervent.

You’ll find this with many beloved brands. Apple is another example whose fans and detractors are equally passionate and on complete opposite ends of the scale.

As part of its 200th Anniversary celebration, Laphroaig took a calculated risk and asked consumers to share their thoughts on the infamous whisky. Knowing how divided the audience is, the brand showed a lot of courage asking for public feedback using the hashtag #OpinionsWelcome.

“Tastes like the bog where a Scottish deerhound lay down to die. And like the old dog, it ever pleases!”

Comments shared across social media from die-hard fans and detractors shared a mixed message. They spoke of the unique flavour profile in terms that many would think are disparaging but that’s the thing about this whisky. It’s so unique that really, only a rare (and justified in my humble opinion) few get it. The success of this campaign is the brand’s acceptance and ownership of the fact that people either love and hate the product in equal fashion.

The “them vs. us” mentality fostered among advocates and influencers may be an even more important ingredient than the peat used to smoke the barley.

They stand behind this campaign and the resulting comments so much that the company created ceramic tiles featuring customer feedback, which now permanently line the entrance way to the distillery. Below are a few of the tiles I snapped while visiting (and joyously sampling) last month. 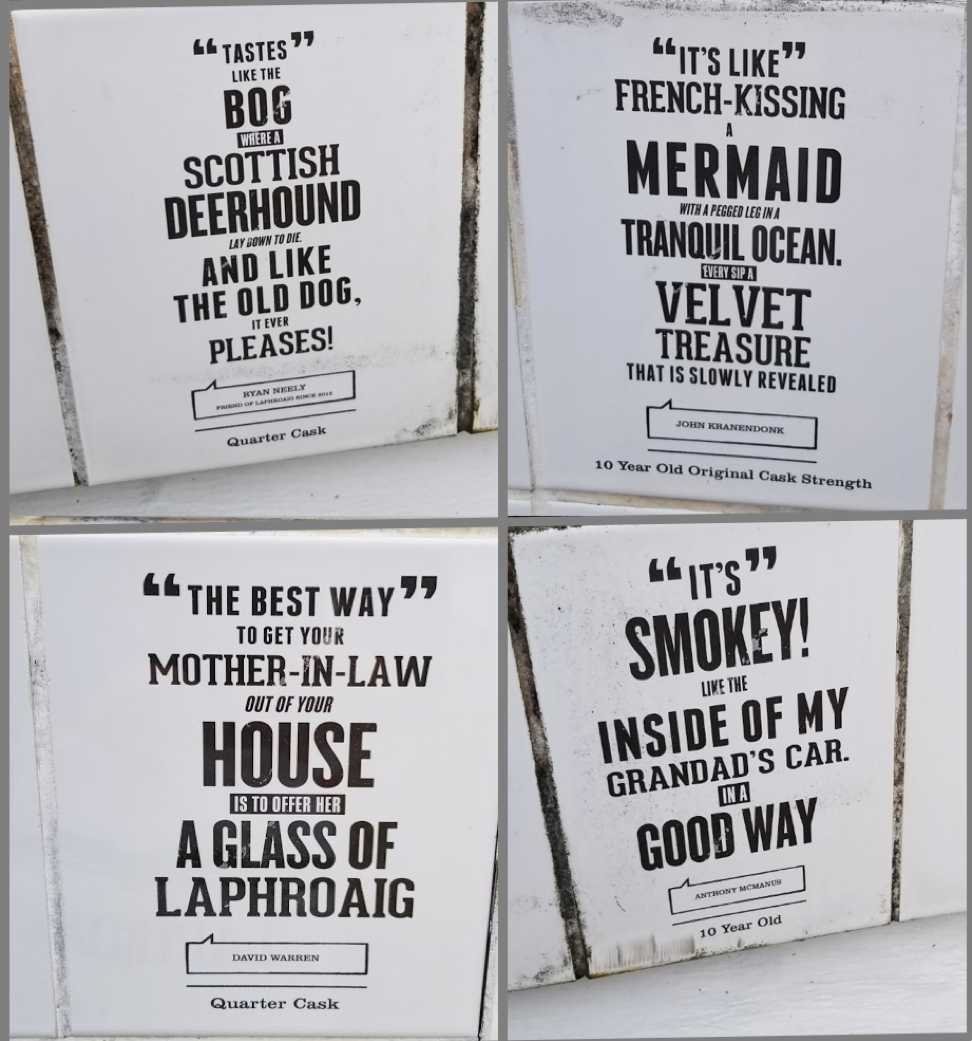 An important strategy for developing powerful influencers (and encouraging passionate testimonials) is establishing the “insiders-only-mentality,” one where people who “get it” know it, and don’t care if others don’t. In fact, it’s preferred.

Thanks to the testimonials from fans and detractors, Laphroaig has become the whisky that fans love passionately, and detractors WANT to love.

Codecademy is an educational company changing the way people engage with education. Its innovative approach to teaching people to code various programming languages has created a successful business and earned a plethora of customer testimonials.

These advocates – through their testimonials –  are used as micro-influencers in a variety of ways but, one of the most prominent is their placement on the company’s Codecademy Stories page. 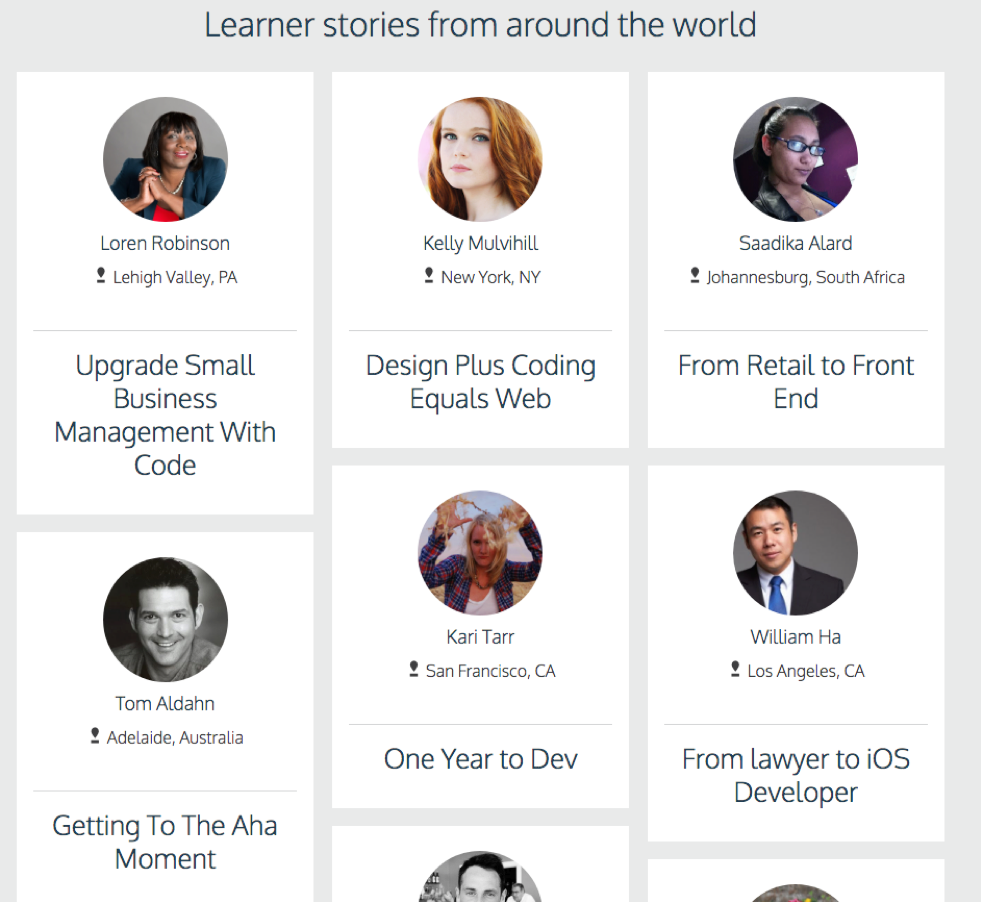 Further, the architecture of the customer testimonial checks off all the right boxes.

Firstly, on its branded page, the company lists a summary of testimonials highlighting the name, location, photo, and the main theme of the message from the client’s feedback.

This provides the casual browser who wants to skim the page a sense that they’d be part of a large international community of successful programmers if they too subscribed.

The variety also helps any user find a face, name, location or comment to which they can more closely relate.

Clicking one of the testimonials opens an in-depth Q&A with the customer who shares his or her story in an easy-to-read and digestible format.

This successful collection did not simply happen; Codecademy created a formalized plan and framework to reach out to graduates, asking each to provide feedback that can be reproduced in a consistent format.

Successful influence marketing campaigns using customer testimonials isn’t a one-off tactic but something that must be part of the standard operating procedures of your company. You must plan and schedule the requesting of feedback and ensure you have the processes and infrastructure to allow customers to easily provide it.

Slack is a business application that connects people and apps in a platform that allows for efficient, targeted, and trackable communication across projects or project teams.

With millions of people utilizing the platform around the world, there’s a large base of customers to pull from when seeking customer testimonials.

However, having too many can be problematic. Where do you place them? What’s too many?

Do prospects read that many testimonials or tune out? Which are the most important ones to highlight at the top of a testimonial page?

Unlike the Codecademy example above, Slack utilizes another strategy that leverages these micro-influencers effectively.

Micro-influencers are individuals whose profile more closely align with the job function and user experience of the potential buyers (as opposed to a macro-influencer who is typically a well-known celebrity, industry analyst or other commentator).

As outlined in our book Influence Marketing, micro-influencers are more likely to sway purchase decisions through their testimonials because buyers trust their first-hand, hands-on experience.

These are customers whose perspective is the same as the buyer, unlike a better-known celebrity who’s often incentivized to share a product that they’ve not used like an end-customer.

Further, when a micro-influencer’s contextual customer testimonial is placed alongside the related product features that the buyer is searching for, its impact becomes even more powerful.

Slack’s use of pro-users’ testimonials expertly positioned at the point and location where a potential customer is making a purchase decision is brilliantly done.

While each of these examples highlights a unique example of  building influence marketing strategies through customer testimonials, there are a few important common threads.

The first is to remember to ask for the testimonial.

It’s human nature to willingly – and often aggressively – share negative experiences with a brand; however, few go out of their way to post a positive comment when they have a good experience.

Not only do you need to ask for a customer testimonial, you must make it easy for the customer to provide the feedback.

Secondly, and more importantly, customer testimonials are earned from providing a great product that drives value for the end-user. Further, it’s delivered by a team that has built a strong relationship with the customer.

So, while it’s important to plan an influence marketing strategy, remember to first look at whether or not you have a customer base from whom you’ve earned such reviews. If not, fix that first. No amount of celebrity influencers will fix a bad product.

Ready to get started?

Learn about our Influence Marketing services or get in touch today to start growing your business with IM.