Gallup Poll is Correct: Social Media DOES NOT Influence Purchases

Are you a marketer? Are you responsible for social media marketing?

If so, you may wish to refresh your CV and LinkedIn profile. You’ll be out of a job soon.

A recent study by surveying giant Gallup reports that social media marketing has no effect on the purchase decisions of US consumers despite the estimated $5.1 billion spent on social media advertising by brands in 2013.

The report has made headlines this week on The Wall Street Journal, Time, and Business Week .

Gallup reports that 62% of its respondents said that social media sites such as Facebook and Twitter have no influence on their decisions to purchase products.  Only 5% reported that social media has had “a great deal of influence” on their purchasing decisions, while another 30% said these channels have “some influence.”

These results are in direct conflict with almost every other study done on the influence of digital and social marketing and advocacy on brand awareness and customer behaviors, such as a Wanderful Media study (of just over 1,000 US adults) that lists a whopping 91 percent of respondents reporting that they “have gone into a store as a result of an online experience.”

AdWeek rebutted Gallup’s findings by pointing to the fact the survey was conducted a year ago and during the last year, so much has changed that the data is no longer relevant. Plus, the survey was only sent to English-speaking Americans and because so many Americans speak Spanish, the data – once again – is flawed.

“And they are the most likely to socialize,” adds Marla Skiko, EVP and Director of Digital Innovation at Starcom MediaVest. “Leaving them out raises questions because they are over-consumers when it comes to social media.” (What a crock of shite.)

Facebook (naturally) jumped on the bandwagon in criticizing the report by offering:  “The only thing this poll shows is that self-reported behavioral data is unreliable. For decades, studies that look at people’s actual, real-world behavior have shown that ads on all mediums, including social media, [affect] the things people buy.”   While this may be true, the argument is akin to the childhood threat of “My dad can beat up your dad.”

Others have made a valid argument when referencing review sites such as Yelp: Why are businesses so afraid of negative reviews? Have you ever made a decision to not visit a restaurant or buy a product (or buy it) based on reviews?  The survey did not define “social media” to include these channels and this would certainly skew the results.

Gallup Poll is correct: Social Media DOES NOT Influence Purchases

Now, as the co-author of Influence Marketing: How to Create, Manage, and Manage Brand Influencers in Social Media Marketing, you’d think I would not be supporting Gallup’s findings. And you’d be right. I’m not defending the results;, they’re clearly misleading. However, my disagreement with the results is based on a more important critique.

Did Gallup report the numbers incorrectly? No. We trust the source and don’t doubt that the summary of answers it listed is accurate. The problem is the same problem that has plagued influence marketing in the digital space since its inception.  The issue is that the authors of the survey – like many brands and marketers – don’t understand the nature of online influence and advocacy and, as a result, set up an inaccurate premise from which to conclude any relevant findings. 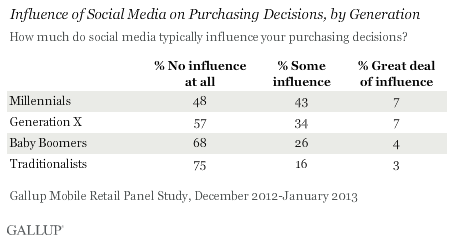 If this same audience was asked if their family, friends, and/or colleagues influenced purchase decisions the responses would have been almost unanimously “yes.”  The point is, the question was asked incorrectly.  Gallup researchers, like many social media platforms and marketers, are still focused on the technology and their own self-importance. Technology may be a conduit for influence, but actual influence is yielded across personal relationships.

Gallup’s own survey asked Americans why they use social media and the overwhelming response was: “To connect with family and friends.” We’ve all seen the studies that show people trust people and not brands or their advertising.

So if people influence people, and 94% of Americans use social media to connect with family and friends, does it not stand to reason that social media has provided the channel from which friends can influence friends? 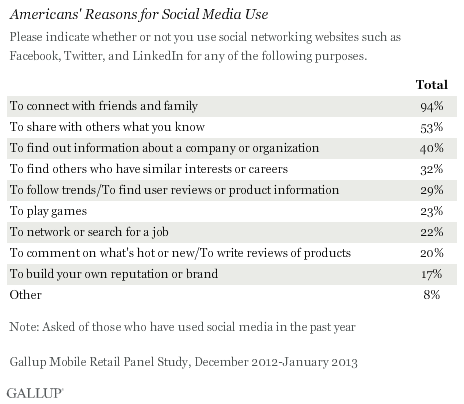 If the audience was asked, “Do the opinions of your family and friends influence your purchase decisions?” the answer would have been overwhelmingly high.

The Real Lesson Learned About Influence Marketing in Social Media

Influence is a verb, not a noun.

When marketers and businesses start focusing on how customers make purchase decisions and the factors that influence those decisions – instead of which channel provides the largest audience and which people demand the greatest attention from that audience – influence marketing campaigns and such studies will continue to be flawed.

Feed Your Community, Not Your Ego
Sam Fiorella