How to Use Trends to Grow Your Business in 2019

What are they to me?

What is keeping me there? How long will I remain a part of them? I can only post, share, browse, so much, after all – surely there must be a dead end to this.

Have I come to it already?

This was my presentation in our Internet Writing and Content Development Strategy class in my Social Media post-graduate program at Seneca College on March 9, 2018.

My question was simple: “Social Media fatigue, anyone?”

It was inspired by a video report on the BBC Modern Me series, entitled Why People Are Choosing to Quit Social Media. It’s a great video, and well worth the watch.

It’s this video, and similar thoughts from many other people, that resulted in my forecast that, eventually, social media will reach its saturation point.

Saturation is what Facebook dreads, and understandably so, as the biggest social network on the planet.

Yet when it faced scrutiny in 2018 for the propagation of fake news on its platform along with data privacy issues, Facebook fatigue wasn’t the closest threat.

Instead, it was its own diminishing credibility.

This was the lead topic in the recently-published Hootsuite’s 2019 Social Media Trends. For me, though, it’s less trends as it is an overarching objective/change across social media.

Here are three tactics that will deliver business in 2019

Their on-the-fly content distribution method makes it feel more real and intimate for users. For brands, Hootsuite says this requires a major shift in focus in 2019. 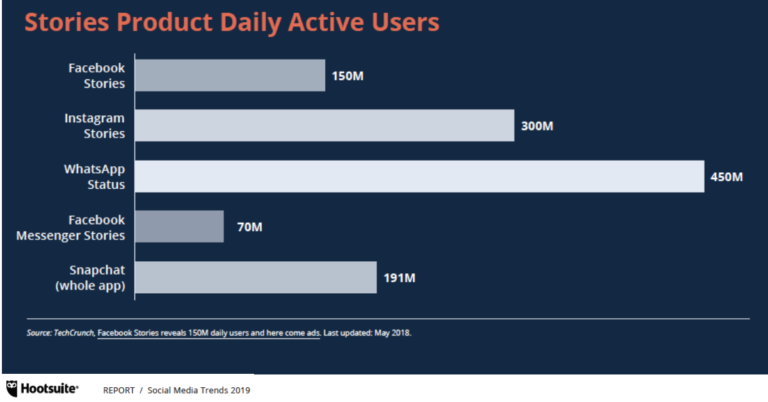 To remain relevant, though, you need to diversify story forms.

Newsrooms should look to to deliver bite-sized news from their websites through their social media channels.

British newspaper The Guardian has already led the way. It has capitalized on the more candid take of Stories as a step towards trust and transparency. It has used IGTV to deliver short feature story on Alfred Gardner, 92 years old, a passenger of Empire Windrush, the British ship that carried the first 540 Jamaicans invited to the UK to work.

According to Hootsuite, Guardian’s Stories strategy has grown its Instagram followers from 860,000 to one million in just four months.

Allowing your social community to host story takeovers that show a day in the life at the offices is WeWork’s success story.

As a co-working company, WeWork has championed the sense of community that its brand fosters. Their members feel connected by sharing stories and experiences in their working spaces, through Instagram and their own social community platform. 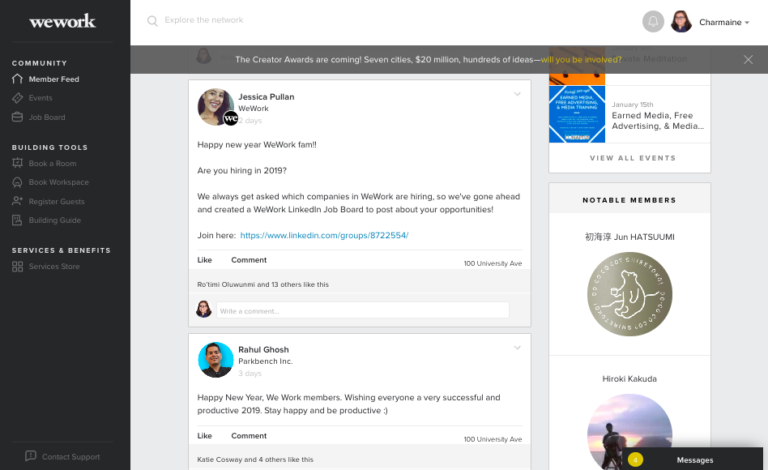 Browse “til they shop. In 2019 social media will remain a key driver of sales for brands, with social ads increasingly directing traffic to purchase pages.

Facebook’s Marketplace and Instagram’s Shoppable posts are a few of the newer options that address social commerce directly, with users conducting one-time transactions or actual retail purchases as it appears on their feeds.

These are the natural successors to the consumer-oriented interface of Pinterest, whose “Buyable Pins” feature has been in effect since 2015.

Pinterest also continues to innovate business-consumer relationships through their interface innovations, with brands that utilize these features finding themselves in a more comfortable territory with consumers who’re looking to make a purchase.

In today’s pay-to-play ecosystem, arguably ushered in by Facebook, social ad budgets are on the rise. 25% of all Facebook pages use paid content, and Facebook alone is responsible for 23% of total US digital ad expenditure.

According to Mary Meeker’s report on 2018 Internet Trends, Facebook’s click-through rate prices jumped 61% in 2018, and their cost per thousand impressions price increased 112%.

With these costs proving a challenge for marketers, and end users increasingly using ad-blocking tools, the profit margins of advertisers are getting slim.

But there is a way around it – creativity.

Spotify uses personal, catchy, creative ads to get to their consumers. For their “Play This at my Funeral” playlist campaign, Spotify took its users content and played on macabre humour as ad ideas.

It was an instant hit among users, with content creators scrambling to create their own version of the ad, effectively becoming a “meme” and generating a huge amount of earned media.

This free promotion of Spotify was made by its content creators, helping the brand reach even more users.

As Hootsuite shared in the webinar, using the right combination of tools, tech, and message are key.

Juice brand Tropicana use Instagram stories to reach its young adult audiences. In a multimedia ad, it integrated video and text and created an engaging how-to by swiping up.

This resulted in an 18-point lift in ad recall and measurable boost in purchase intent.

Take advantage of new multimedia ad formats to entertain and inform audiences, instead of just blasting them with ad copy. – Hootsuite

When people shop in person, they tend to talk to a sales assistant. Social commerce is no different.

Messaging apps establish a rapport between brand and the consumer, with pre-scripted messages enabling a faster path to a sale.

Indeed, as more people spend time on messaging instead of sharing content on social due to privacy concerns, private conversations will become the new norm in 2019.

This opens up the opportunities for a cross-channel messenger platform for catching, routing, and responding to all messaging queries.

Of course, this leads to another challenge with one-to-one messaging tools: scale.

In the United States, messaging is the most preferred medium of customer service. In a study of 8,000 people by Facebook, 69% have stated that confidence about a brand is improved by their availability on messaging apps.

Consumer interest in this communication preference has led to brands racing to develop tools to handle direct messaging.

Domino’s pizza Messenger Bot is a great example, as it allows users to find coupons and create delivery orders through their online messenger. Simple, seamless, effective.

Messaging has moved beyond a customer service platform, where it first found its wider use – today, it is a strong sales and ad channel.

Are you ready for the shift?