This past week, Leadtail, a digital and social media services firm, released a report entitled: B2B Social Marketing Report: Marketing Executives on Twitter. It’s billed as a report that provides insights into how digital marketers engage on Twitter.

Why is this report necessary? Well, Leadtail’s target audience seems to be firms that seek to capture the attention of marketing executives (who are decision makers within their organizations) so that it may better market and sell products or services to them; thus the report sub-title: “Reach, Engage, and Influence Marketing Decision Makers.”

The authors introduce the study and report this way:

Despite all the technology available, your ability to reach, engage, and influence marketing executives at leading brands and agencies is still limited. While buyer personas, surveys, and search marketing data can get you in the ballpark, we believe social media insights are now a “must-have” for understanding senior marketers in a way that becomes truly actionable.

Imagine if you could listen to the daily conversations of brand marketers and agency executives? How would you use what you heard to better reach, engage, and influence these marketing decision makers to take the actions you care most about?

Unlike many of the influence scoring tools (and some of the new influence marketing platforms coming onto the market today), Leadtail seems to understand the importance of analyzing the conversations of the target audiences in order to gain the insights required to most effectively engage them. When compared with the popularity metrics used by scoring platforms, which measure the amount of online activity specific members of that community produce or the viral amplification of those messages, Leadtail’s report is a positive sign that we’re moving forward in our understanding of how the practice of influence marketing works.

Yet any positive momentum from this study has been overshadowed by negativity and the social media mob.

One of the data points shared in the report is a list of the top 100 marketers whom senior marketers referenced the most when posting on Twitter. The list is a hodgepodge of social and entertainment celebrities as well as marketing executives. 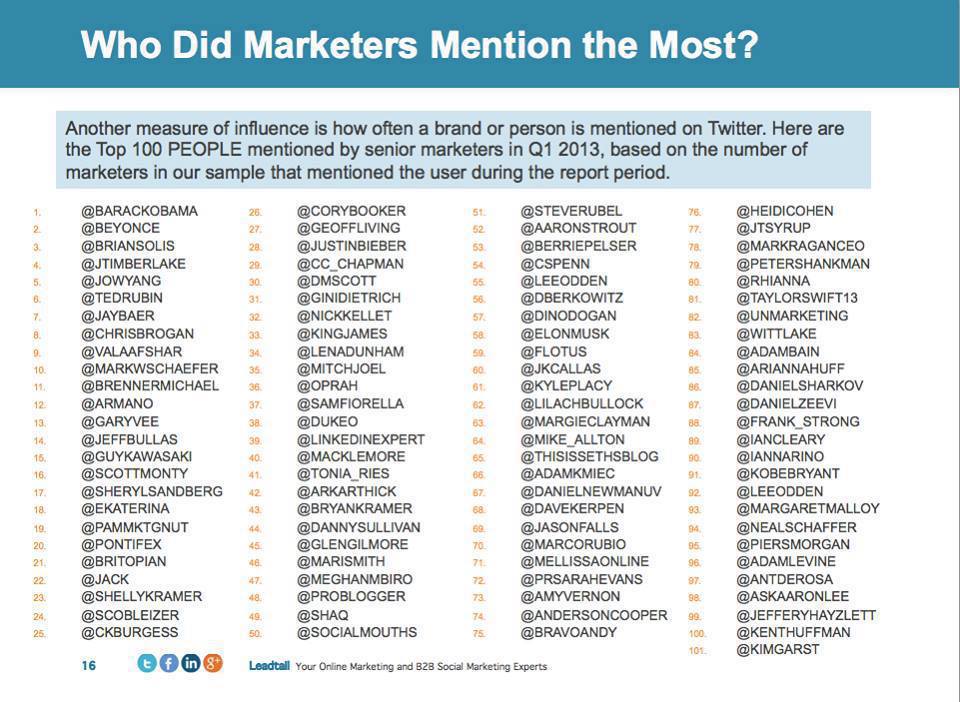 Since the report’s release, it’s this one piece of data that has generated the most commentary across social channels, which is disappointing. The online commentary has been a mix of “I’m honored to be included in this list” and kudos from  followers, to rants about how such lists are nothing more than an attempt to play on the ego of those social celebrities in order to encourage them to share the report.

I disagree with both.

I was included as one of the marketing executives that other marketing executives referenced often in their tweets. Yet, I didn’t share or announce the fact that I’m included because it says nothing about me as a marketer other than the fact that other marketers are talking to or about me. Maybe they’re criticizing me for the incoherence of my blogs posts or expressing their views on how terrible they think my business book on influence marketing is. We don’t know. The point is that in isolation there’s no context and thus, no value. It certainly can’t be equated to any form of award or achievement that I’d want to boast about.

Criticizing the list is also unfair because it was neither offered as an award or kudos to those listed, nor was it offered in isolation as an independent source of data that one could draw any sort of conclusion from.  It was just one set of data among many other data sets shared by those who conducted the study of the online conversation habits of marketing executives.

Of course, the authors of the report did not do themselves any favors by introducing the list with: “Another measure of influence is how often a brand or person is mentioned on Twitter.” On the other hand, they clearly state that the names listed were based on the marketers in their sample set and not all marketers. Still, without the context of the relationships between the parties and the content referenced in those conversations, the list is meaningless.

Some shared the one page in isolation with gratitude for being included while others, who were not listed, shared it to acknowledge those who were. This raised the ire of other marketers for the meaninglessness of the list and how ineffective it was as measurement of influence.  The point is, the list was not intended to rank the most influential marketers on Twitter. Yet the ego – or anti-ego as the case may be – took over and overshadowed the true purpose of the report… and any value it may have contained.

Does the Report have any Value?

The report attempts to provide insights into the conversations created by marketing executives online, including who they’re taking about, what sources they reference most, what brands they talk about most often, etc.

The data might be helpful when added to existing prospective customer data and filtered by other context relevant to both the business seeking to engage its audience and the subject matter of the conversations among that audience.

The report was not intended to be a “most influential list” or a silver-bullet solution on how to become influential. Unfortunately the egos and the lynch-mob mentality of social media took over, causing the real takeaways from this study to be overshadowed.

My takeaway: The authors understand that engaging and influencing a prospective customer base in social media channels isn’t achieved by identifying those most popular within the community but breaking down the conversations occurring in that community.  Given the focus on the inaccurate social scoring platforms and metrics used to determine who is and isn’t “influential” in social media these past few years, I’m encouraged by their efforts, if not their execution, and wish more people would have focused on that.  The study demonstrates one way we might consider better understanding the motivation of those we seek to influence, who they’re talking to, and where they’re doing it. Unfortunately, it doesn’t go deep enough but the onus for that is on the sales executives and the marketing team that supports them, not third party software.

Sensei Debates:  Are such studies a move in the right direction or just a content marketing ploy to create viral shares and artificial lift in social channels?

See the full report here in a Slideshare presentation.