Within minutes of hearing the horrible news that 3 explosions at this year’s Boston Marathon killed and injured people, I did what most of us do: I turned to Twitter.

Given my experiences during similar disasters in the past, I knew I should have walked away from Twitter, but I didn’t because there were people that I know at the event and I thought it was the best way to check in with them (luckily, all were fine).

One of my first posts on Twitter was a warning to sleezy marketers to avoid the temptation to newsjack the #BostonMarathon hashtag:

Newsjacking – the process by which you inject your ideas or angles into breaking news, in real-time, in order to generate media coverage for yourself or your business.

Respected author David Meerman Scott wrote a great book on the subject entitled Newsjacking: How to Inject your Ideas into a Breaking News Story and Generate Tons of Media Coverage.

In it, he explains how the rules of traditional PR and marketing campaigns have changed, that public discourse moves so fast that “all it takes is a single afternoon to blast the wheels off someone’s laboriously crafted narrative.”

I know, who would do such a thing? Well, given that newsjacking campaigns have been successful, such as what Oreo, Audi, and Walgreens did during this year’s Super Bowl, it shouldn’t surprise any of us that people will try.

And then, there it was. Only this time it wasn’t a corporation trying to inject their product into a trending news story, but a sleezy “journalist” trying to increase his public persona.

Fox News contributor Erik Rush, in an attempt to rally America’s own extremists, called for all Muslims to be rounded up in the wake of the deadly blasts, creating its own viral wave of activity and news story. Before the true culprits could be identified, he effectively hijacked the story to create his own. 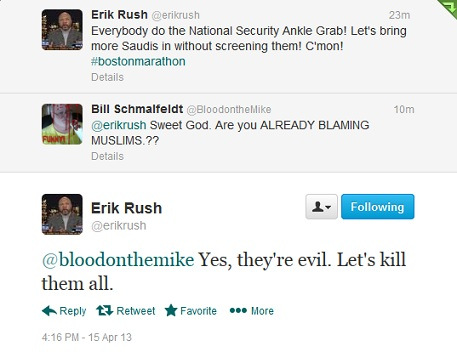 What has our society evolved to? Many give social media credit for everything from connecting and building bridges between people to toppling governments, but on days like this all I feel we’ve accomplished is the provision of another forum for bigots and extremists to fuel ignorance.

For the last few years, I’ve been signing off each of my blog posts with the sentiment “Feed Your Community, Not Your Ego.” Never have I meant it more than today. And never have I been so ashamed of humanity.