Online Customer Reviews – Are They Worth The Trouble?

A New York City restaurant is learning a valuable lesson in social media marketing and community management this week.

Feast, a relatively new, yet popular, East village restaurant, finds itself at the center of brewing debate across social channels because of its reaction to a patron wearing Google Glass.

In reality, the kerfuffle can be attributed more to the reaction of the patron than that of the restaurant.

Katy Kasmai entered Feast for a meal wearing the infamous Google Glass, which (rightly so) made the management and other customers uncomfortable.

As a result, the management asked Ms. Kasmail to remove the device before ordering. She refused, opting to leave the restaurant instead. Clearly, she left the restaurant in a snit as evidenced by her subsequent one-star rating and rant on the restaurant’s Google profile.

Not satisfied to simply leave a poor rating, Ms. Kasmai took to Google+ and left the following message for her approximately 3000 followers: 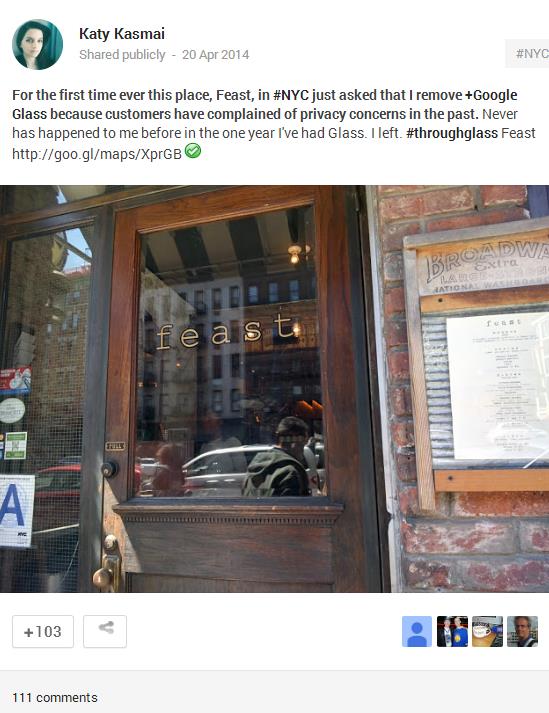 The idea behind Google Glass is to allow users the opportunity to record and/or broadcast their point of view to the world. Of course, doing so in a restaurant means that one would record and broadcast other patrons in the restaurant who may cross your line of sight, including what they’re eating, what they’re discussing or who they’re eating with.

I sympathize with the management and support their request for the removal of the Google Glass. Surely the privacy and comfort of all patrons must be a responsibility of the restaurant’s management?

Beware the Wisdom of Crowds

Any restaurant can have a negative review whether it’s justified or not; that’s the nature of the Internet and social media. What makes this story a little different is the fact that Ms. Kasmai is the founder of Glass NYC (a local community of Explorers™) and the CEO of Xocracy, a startup designed to facilitate direct democracy by voting on social and political issues in real time.  Taking her lead, Kasmai’s followers jumped on the bandwagon, posting negative reviews on Google without even visiting the restaurant. 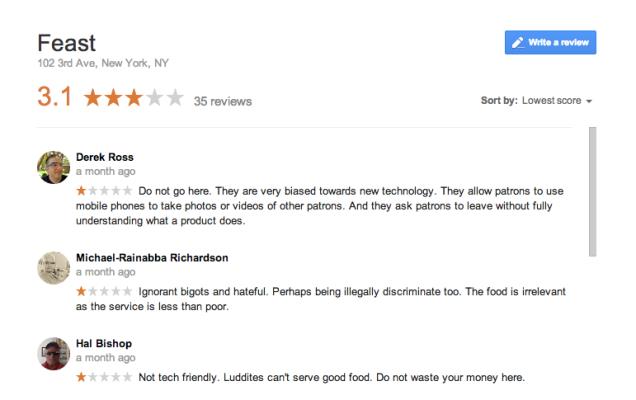 Various publications such as EV Grieve, a local food blog, shared the story, which in turn was shared across social media by friends of the brand and others who were just astonished at the stupidity of Kasmai’s (and her minions’) reaction.  Indignant over the rationale (or lack thereof) behind the negativity, many, many more people waded into the conversation with five-star ratings in order to drown out the poor reviews.

Although I travel to NYC often, this is the first time I’ve heard of this restaurant. In fact, I’ve been hearing about it multiple times a day for the past few days. Frankly, with all this publicity, all I really know about it is its brilliant policy preventing “Glassholes” from dining in its establishment, and very little about its food.

Online Customer Reviews – Are They Worth The Trouble?

This is a great example with which to open a discussion about the value of online ratings. Have they outlived their usefulness? We know that many businesses pay cyber-shills to artificially bump up positive reviews and ratings and, as in the case with Feast, many post reviews as a result of a smear campaign instead of honest reactions to the service or product provided by the business.

The promise of the democratization of information and “influence” in the online space is at best a myth, and at worst a fraud. To be considered valuable for brands or consumers, online reviews and ratings must be based on trust…trust in the integrity of those posting reviews and the honesty of their comments. When such integrity and honesty cannot be guaranteed, is there any true value?

Have online reviews outlived their usefulness?
Share your thoughts on this case study or the debate question in the comments below.