Smartphones and the Numbing of the American Mind

Smartphone usage is on the rise. Yeah, I know; no big surprise there. Smartphones have become an appendage that we turn to almost constantly for the time, news, communications, entertainment, and directions.  Here are some staggering stats (according to a study conducted by Tecmark)

In the US, a staggering 71% of the adult population use smartphones. Among Millennials, a cohort whose numbers (77 million) rank right up there with Boomers, smartphones are even more prevalent: 85% of 18 to24-year-olds, and 86% of 25 to34-year-olds own smartphones. We look to Millennials becuase trend currents can be predicted by their current behaviors. So it’s no surprise that most analysts predict that smart phone adoption, as a percentage of the population, will increase even further in the next 10 years. Below is a summary of smart phone adoption by age group and gender according to Nielsen, as at Q2, 2014. 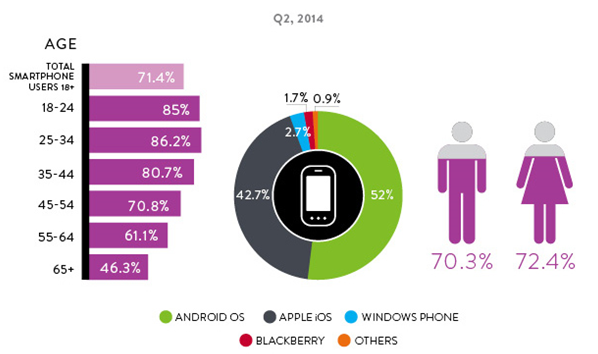 Smartphones and the Numbing of the American Mind

The numbers clearly indicate that there’s an increasing dependency on smartphones by the public  but what effect does that have on our productivity, or our intelligence for that matter?

Steve Mazie wrote an interesting article for BigThink, in which he claims that smart phones are robbing us of our best ideas. In short, this hypothesis is based on the fact that most of us turn to our phones to kill time (scrolling Facebook, playing Bejeweled, etc.) on our downtime, instead of dedicating that time to more productive “thinking.”

He shares the story of Charles Townes, the Nobel Prize-winning physicist who invented the laser. Townes reported that the idea for the laser came to him during some downtime while sitting on a park bench. In the absence of mobile devices to occupy his time and mind, he took out a piece of paper and scribbled some thoughts that came to him unexpectedly. Those thoughts were later credited for inspiring the ideas that would eventually become the invention of the laser.

If that were today, Townes, like so many of us, would have turned on his smartphone to check Facebook or other social networks, play a game, read email, or watch Super Bowl commercials on YouTube.  Would his mind have been free and open to have creative and spontaneous thoughts pop in?

What Are Smartphones Doing to Business Innovation and Productivity?

Extending this premise to business, where an even greater percentage of people own/use smartphones on a daily basis, how much paid or free time is spent “surfing” instead of feely thinking?  Jonathan Smallwood, a cognitive psychologist, discovered that there’s a direct link between distraction and creativity. His findings call out the principle of “perceptual decoupling,” which explains how a mind that’s left to wander, free of constant attention to immediate needs and activities, is more likely to create unique and innovative ideas.

So innovation is supported by “wandering minds.” Yet, the daily distraction and attention to our smartphones keep our minds in the here-and-now, instead of allowing them to wander.

“There’s a close link between originality, novelty, and creativity on the one hand, and the sort of spontaneous thoughts that we generate when our minds are idle,” states Smallwood.

True, much of the time business professionals use their smartphones during off-hours is for business-related tasks. According to a study produced by the Centre for Creative Leadership, 60% of smartphone-carrying professionals stay connected with work for 13.5 hours per day, which is 5 hours more than the typical eight-hour workday. However, that same smartphone is also used for other activities.  According to Pew Research Center’s Internet & American Life Project, 81% of people report using their devices for sending/receiving text messages, 60% use it to surf the Internet, 50% download apps, 49% say it’s used for real-time directions and recommendations, and 48% say it’s used for listening to music.

Employers who keep their employees tethered to their phones – and those addicted to their smart phones – argue that these devices provide freedom; the freedom to pick up your kid from school, hit the gym, or visit the optomitrist during the day because we won’t miss anything at work. However, this freedom may come at a cost; being “always on” takes a toll on a person’s psyche and emotions. “There’s a Heisenbergian uncertainty to one’s putative off-hours, a nagging sense that you can never quite be present in the here and now, because hey, work might intrude at any moment. You’re not officially working, yet you remain entangled—never quite able to relax and detach,” argues Clive Thompson, Environment analyst for Mother Jones.

While a smartphone can be used as a productivity tool, it’s also a source of constant distraction. The net effect of that productivity-distraction debate on our personal or professional accomplishments may never been quantified; however, I suspect the results may not be to our liking.

Has the constant distraction provided by smartphones diminished our capacity to innovate?