Josh Ostrovsky, otherwise known as “The Fat Jew” is quite a big deal these days (pun intended).

Ostrovsky has amassed a large social media audience, predominately on Instagram (5.5 million followers) and Twitter (251,000 followers), through which he shares his humorous take on life. Often, these viewpoints are profanity-laced, lewd, and/or off-color comments and images, which have not  stunted his popularity; in fact, it may be the very reason for it.

It’s that popularity and following that has attracted the attention of brand marketers desperately seeking a social media magic bullet. As is common with many influence marketing campaigns over the last few years, brand marketers seek out people with large followings on one or more social media networks and pay (or otherwise incentive) them to promote a product to that audience.

For those who work tirelessly to build large social followings, sponsored posts can be lucrative, and in some cases, a full-time career. Case in point: “The Fat Jew’s” online popularity is now, according to Ostrovsky, earning him hundreds of thousands of dollars annually.

As reported by Business Insider, brands are offering Ostrovsky $6,000 for each product or slogan mention in one of his Instagram posts.   Here’s an example of a paid mention for Bud Light’s “Up For Whatever Campaign.”  Instead of simply posting a picture of himself drinking the beer, he tasked his grandmother to tattoo a friend’s back and posted the picture in this Tweet. 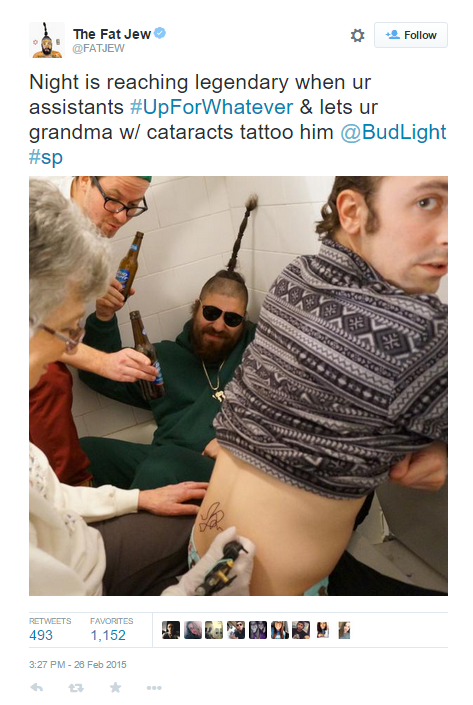 “The Fat Jew’s” brand of humor is not everyone’s cup of tea. He has been criticized by many; at worst some claim he has plagiarized posts (from Imgur), at best he’s simply being inappropriate. However, I don’t see the content of his posts to be a concern for brands practicing influence marketing. If a brand marketer believes that his sense of humor is aligned with their brand persona, then paying him to align that humor with their brand is fine.

The problem lies in the fact that brands are paying for access to Ostrovsky’s following, an audience whose demographics cannot be quantified in the same manner that Facebook targets audiences via personal profiles, preferences, and past behaviors. Marketers would scoff at the notion of paying for magazine advertising without first having reams of data on the demographics of the audience being reached and how closely they’re aligned their existing or prospective customer base. Yet, somehow, brand marketers throw money at those Instagram-celebrities without holding them to the same requirements.

Therein lies the problem; assuming that the “The Fat Jew’s” followers are similar to him is a mistake, as is assuming that they would all be potential customers in the buying cycle. There’s little correlation between one’s sense of humor and purchase decisions.

Context and relationships are important considerations when executing influence marketing campaigns that deliver a shift in purchase decisions, and that’s something that cannot be done when hiring self-made Instagram celebrities. Identifying common characteristics among cohorts is certainly a manner in which to gauge a target audience; however, who they follow is not an accurate guidepost for their purchasing behavior.

Not all Followers Are Created Equal

I need look no further than my own social circles for a case study. Within this group there are many who share my sarcastic sense of humor, for example, but who live completely different lives including geography, marital status, and social-economic class, among other differences. It’s those factors, not our common sense of humor and shared social media posts, that dictate our individual purchase behavior.

A more recent example is the discovery that many of the people I’ve become close friends with – people whom I’ve followed for years and shared many personal experiences with through online conversations – are diametrically opposed to me when it comes to political and religious affiliations.  These are people who belong to my social circle as well as various online communities that would be attractive to brands, yet as potential buyers, we’re not all equal.

You can’t, as they say, judge a book by its cover. A group of followers congregate on social media networks for a variety of reasons, many of which don’t align with product preferences or purchasing behavior.

Now I may be giving brand marketers too much credit here. Maybe they’re not assuming anything about the audience? Maybe they’re simply looking at “The Fat Jew’s” total number of followers and thinking:  “That’s a big group and so it’s a worthwhile gamble to assume that getting my product’s name/image in front of them will naturally result in product sales. We hope.”

You know what they say about ASSUMING, right? “When you assume, you make an ASS of U and ME.”

The reality is that there’s little data known about “The Fat Jew’s” Twitter and Instagram following. The demographics of Twitter followers, for example, cannot be quantified in the same manner that Facebook or other digital properties target audiences through their advertising. Well, at least not by simply basing decisions on total follower count.

Is “The Fat Jew” a Worthwhile Influence Marketing Investment?

So, today’s debate is: Is “The Fat Jew” a worthwhile influence marketing investment for brands?  I’d argue no, not if the goal is to find the most effective sales channel for a return on investment. That said, by changing tactics he could be of tremendous value to brands.

Ostrovsky has demonstrated a keen ability to earn a lot of attention for his witty writing and creative ideas. As a result, brands would see a greater return (at least a more measurable one) by hiring him as a writer, creative director or maybe a paid actor for videos/television commercials.

Having a roster of such creative people actively developing social media content would generate far greater reach, to a larger and more targeted audience, than their individual social media followings.

Instead of paying popular Instagrammers for their followers, why not reset your filter to find the most creative – instead of just the most popular – and  acquire their talent?

The future of influence marketing is not in paid placements through socially popular individuals as Danny Brown and I detailed in our book Influence Marketing, How To Create, Manage, and Measure Brand Influencers in Social Media Marketing.  Swaying purchase decisions – the ultimate goal and measurement of influence marketing – is based on identifying and accessing the power of micro-influencers.  Micro-influencers are people whose personal or professional relationship with the potential customer makes them a trusted authority capable of affecting how their peers spend money – or not.

Businesses are beginning to adopt this strategy with greater frequency thanks to evolving technologies, yet too many are still throwing away money on mass “spray and pray” influence marketing campaigns.

Is paying popular Instagrammers for product mentions an effective influence marketing exercise for brands managers?    Join the discussion in the comments below.