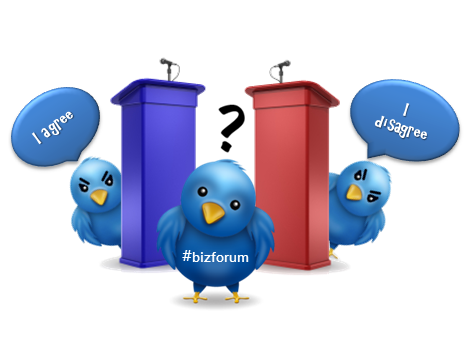 I founded the  #bizforum Twitter  debate 100 weeks ago in response to both the growing popularity of Twitter chats but also my personal frustration at the levity or thinness of many of them.  Many Twitter chats encouraged featured guests or the general public to tweet responses to a series of questions within a specific topic of interest. I saw a need to go beyond the broadcasting that these formats either encouraged or resulted in. #bizforum was an experiment at first. A debate format that would ask the audience to delve further into both sides of trending business topics such as sales & marketing, customer service, business strategy & leadership, communication and/or social business and get to the heart of WHY we believed what we did.

A debate in 140 characters has had its challenges yet it also forced participants to be laser focused in their commentary in order to convince others that their opinion was right. The combination of limited characters and the agree/disagree response format has encouraged participants to really consider what they’re tweeting instead of simply rehashing pithy one-liners.

We’ve always encouraged people to take a stance on one side of the topic and express why they believe in that position. “It depends” responses are generally frowned upon and met with a “{{{buzz}}}” from myself or one of the regulars. When it seems that there’s too much agreement on a topic, one of the participants (usually me) argues the contrarian opinion to ward off complacency and to ensure no stone is left unturned. This has solidified beliefs in some while others began to question long-held theories.

There’s never been a right or wrong answer. No judgements or “winners” are selected. The focus has been on hearing different opinions, experiences and case studies so that we evolve the discourse to the next level.

I’ve been impressed with the incredibly bright group of people who join me every week. We’ve been educated by thousands of participants over the last 100 weeks; some are weekly regulars and others jump in occasionally depending on the topic. The one constant has been the professionalism and respect that everyone displays when debating their opinions.  The inclusive nature of the debate encourages participation by people from various experiences and knowledge levels. The willingness to debate, share and learn from each other has been a true bright spot in the socialverse for me this past year.

My personal philosophy has always been to “feed your community, not your ego” and this community has exemplified it like no other I’ve been involved with.

To mark the 100th anniversary of #bizforum, we’ll be hosting a dual-format debate this week.  We’ve asked some of the debate regulars to join us on a live Google+ Hangout (video debate) that will run alongside the usual Twitter debate (Wed, May 22nd from 8 to 9 PM Eastern Time).  Participants will be able to watch the live debate streamed on Google+ and YouTube while participating in the Twitter discussion.

The debate topic this week will be one close to my heart: Influence Marketing: Marketing or Sales Strategy?  I’ll be joined by my co-author Danny Brown and we’ll be giving away 5 books during the debate to random participants.

I’ve been participating in online chats since the start of 2011. They can be a good source of education and provide opportunities to meet interesting new friends and colleagues, when managed right.  On June 14, 2011 I wrote an article for 12Most.com called the 12 Most Helpful Tips for Conversing in a Twitter chat in which I listed my experiences on gaining the most from these fast-paced group discussions.    Below are just a few of the suggestions I listed there.

1. Filter your stream by using a 3rd party Twitter client such as Tweetdeck,  Hootsuite  or other tools such as oneQube’s SmartStream to simplify the experience by filtering the hashtag into one stream or “column.”.

2. Don’t try to be a rock star; you don’t need to respond to each tweet, or even read each one to get something out of the chat. Scan the stream, find a post that intrigues you and comment on that with a reply or re-tweet. Carry on a conversation with those individuals and when it’s done, scan for another that you’re interested in.

3. If you’re uncomfortable tweeting in a chat there is no requirement to do so. It’s acceptable to simply monitor the stream for your own entertainment or education.

4. This is not your mother’s dinner table; it’s OK to interrupt and join in other’s conversations in the tweet stream. Chats are about engaging and learning from others.  If you have a point of view, don’t be afraid to share it. Know others may not agree with you, but that’s OK. The purpose of a chat is to discuss the topic – and all opinions are valid.

5 Everyone has a right to an opinion. Accept other’s opinions and if you disagree, state your disagreement and present an intelligent argument; it makes for a great chat. Keep it professional and if you feel the discussion has run its course, agree to disagree and move on to another discussion.

Are you a regular at #bizforum? Lurked from time to time? Never participated?  Whichever you are, we welcome you to join us on our 100th anniversary and see why this community continues to gather weekly. We debate trending business topics each Wednesday, from 8 to 9 PM Eastern time using the #bizforum hashtag.