Vote: Should Brands Use YouTube Hoaxes In Marketing Mix?

Earlier this week, Lake Ontario (the greatest of the Great Lakes in my opinion – sorry Lake Superior) made international headlines when a man posted a cell phone video on YouTube of him and his buddies fishing along its shores. What made the video remarkable, and thus go viral, is the fact that the videographer caught a glimpse of a shark jumping out of the water and snatching the fish his friend was reeling in.

The video was posted on July 10th and almost immediately traditional media and the Internet werebuzzing with copious content including parental warnings to keep kids out of the waters and scientific explanations of how sharks could get into the Great Lakes, to pundits explaining how impossible it is for sharks to exist in the lake. I was one of the gullible citizens who shared the story in my Facebook stream with a tongue-in-cheek warning about keeping the dogs out of the water.  Like 99% of us, I thought it was real; the shark had its own Twitter account after all.

After two days, Paul Lewis, the president of the Discovery Channel, announced that the shark video was a stunt to promote its upcoming Shark Week programming.  Mr. Lewis stated that they had to out themselves earlier than planned because his team began tracking too many stories of mothers telling their kids to stay out of the water this summer and he didn’t “want to disrupt anyone’s summer.” Further, the fact that the situation was being debated in the legislature was a warning sign that this could escalate into a negative reaction when the final reveal was exposed, which could have the opposite PR effect from the one Discovery intended.

The campaign was created using the famous “Girl Catches Fire Twerking” YouTube video as a template. The video, showing a woman twerking to music in her apartment and catching fire when she “accidentally” falls on a candle, became a massive Internet sensation.

Just when the video’s popularity seemed to be waning, it was announced that the video was a hoax, another gag in a series staged by late-night talk show host Jimmy Kimmel.

Vote: Are YouTube Hoaxes the Next Big Marketing Trend?

This video stunt is another example of the importance of social media – and YouTube in particular – in today’s marketing mix.  Jimmy Fallon was hired to replace Jay Leno, in part, because of the social media popularity of stunts from rival host Jimmy Kimmel. Fallon has successfully used video and social media sharing to drive a new, larger, and younger audience to the venerable Tonight Show.  The show’s YouTube channel, which has almost 4,000,000 subscribers and posts new videos of on-camera and behind-the-scenes shenanigans nightly, is now one of the most shared on the Internet.

Certainly a brand cannot ignore the importance of video in the marketing mix, especially given that YouTube is ranked the second-largest search engine in the world, just behind its sibling Google. Further, the SEO effect of the merging of YouTube with Google+’s commenting engine and social graph display hierarchy has elevated the importance of video marketing.

So, should you be planning a hoax video of your own? Well, here’s the thing: The Internet is fickle. Consumers are fickle and the media are even more fickle.  Just last week I posted an article illustrating how businesses were trying (and failing) to emulate the real-time marketing success of the Oreo-Super Bowl “Black Out” ad. 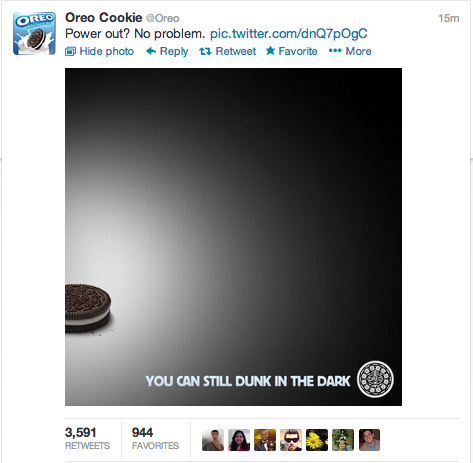 Today, any form of newsjacking or real-time marketing gimmick like the Oreo campaign above simply pales in comparison, regardless of how clever it may be. The Internet and social media have an increasingly short attention span and a significantly increasing amount of repetitive noise being published every day.

Cutting through that clutter certainly requires real-time content along with some wittiness and entertainment value; however, it also requires innovation.  Be careful to not simply repeat campaigns that have been innovated by others or, at a minimum, adjust your PR and earned media expectations.

So, back to the question: Should brands plan YouTube hoaxes as part of their marketing mix?  Yes/No? Vote/join the discussion in the comments below.