The cost of a Super Bowl commercial, while remaining flat at a rate of $4 million in 2014, has increased by an average of 10% per year since the first Super Bowl was aired ($45,000 for 30 seconds), according to SportingCharts.com.

Clearly, there’s no shortage of interest in this event by the public or advertisers. In fact, the commercial production for the annual championship game has become as much a spectator event as the football game itself. 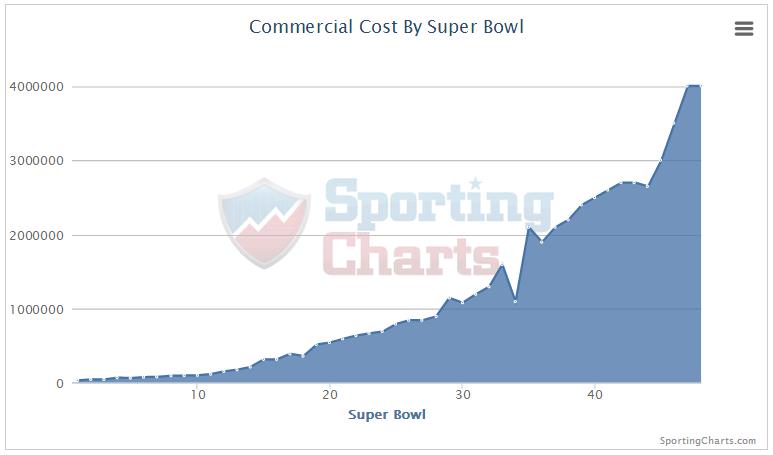 Another mass sports spectacle that draws millions in advertising is the Olympics. Bloomberg BusinessWeek reports that a 30-second commercial on NBC and its affiliates during the 2014 Sochi Olympics is running approximately $96,000, and with 5,500 minutes of ad time, we’re looking at $1 billion in total advertising revenue.

And then there’s the granddaddy of sponsorships: The FIFA World Cup.  The quadrennial soccer (football to the rest of the world) world championships were watched by an estimated 3.2 billion people in 2010, including 715 million tuning in for the final game alone.  A 30-second commercial during ABC’s coverage the World Cup Final in Brazil will run businesses approximately $250,000, reports Suzanne Vranica of the Wall Street Journal.

Thanks to the Sochi Olympics and the 2014 World Cup in Brazil, Magna Global predicts that worldwide advertising spending will increase 6.5% in 2014 to reach nearly $522 billion.

Based on these numbers, all seems well in the world of brand advertising. However, there’s a threat growing in this space that is good and bad news for brand marketers.

Disruptive marketing, a powerful undercurrent in the marketing and advertising sectors, has event producers and sports associations trembling.

Disruptive marketing, a child of guerilla marketing strategies, began manifesting on the world stage in a big way during the 1984 Olympics in Los Angeles.

Here, the International Olympic Committee (IOC) dramatically lowered the number of advertisers it allowed to advertise at the Olympics to a mere 35, down from hundreds during previous Olympics.

Welcome to “The Official Sponsor of…” advertising.   The effort was so successful (the ’84 Olympics posted a huge profit), that this program went international.  From that point forward, the IOC awarded a small group of advertisers the exclusive rights to use the Olympic symbol during a particular Olympic period – in exchange for a hefty sum of money.

A New Age of Guerilla Marketing

During the 1996 Olympics, Rebook paid a reported $50 million to be an official sponsor of the games. Rival shoe maker Nike, which opted out of advertising at the event, decided to ambush the games instead.

Adding insult to injury, the company built a “Nike Centre” pavilion just outside the official Olympic Village, which provided spectators and athletes a view of the action.

Such tactics have become such a problem that the IOC and other event producers are deploying defensive and offensive strategies akin those deployed by the top hockey teams competing at the Sochi Olympics.   Each has a regiment of lawyers lying in wait, ready to attack any brand that jeopardizes the essential advertising revenue paid by exclusive sponsors. 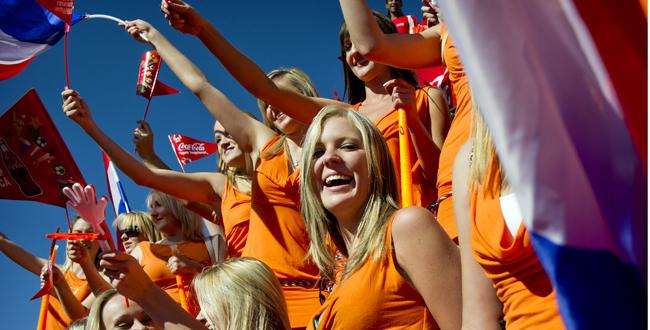 For example, FIFA, organizers of the World Cup, took legal action against Bavaria, a Dutch brewer, because of its disruptive marketing tactics during a FIFA event in which Budweiser was the official sponsor.  The courageous and innovative brewer hired a few dozen women to sit in the stands wearing orange miniskirts, the official color of the corporate brand, in order to generate buzz around its product.

Ambush marketing has been given a boost by social media and Internet-enabled devices.  According to Twitter, three separate soccer matches have already achieved higher tweets-per-second peaks than the 2012 London Olympics.

The 2012 Euro Cup final alone generated 16.5 million total tweets from a viewing audience of just under 300 million. The last World Cup final drew more than twice as many viewers, and that’s just one game. There are 64 matches planned during the 2014 World Cup in Brazil, which will produce hundreds of millions of online mentions across social channels.

The earned media that can be achieved through innovative social media campaigning is a powerful incentive for brands choosing digitally disruptive advertising.   Just look at the infamous “You can still tweet in the dark” post by Oreo during the 2013 Super Bowl. One timely, relevant, and well-placed tweet and Oreo will now forever be known as the “brand that won the Super Bowl.”

Another great example: The Sochi Olympic torch, during its pre-games marathon across Russia, extinguished unexpectedly.  A member of the public watching from the side lines jumped to the rescue and re-lit it using a Zippo lighter. Taking advantage of the opportunity to newsjack the Olympic Games, Zippo tweeted: “Zippo saves the Olympics!”  Of course, the Sochi Olympic committee called up their legal team, which quashed the campaign and forced Zippo to delete their social commentary.

Yes, the costs of advertising for high profile sporting events are on the rise. And yes, big corporations seem content to pay exorbitant rates to get their products in front of the large audiences these events command.

However, the escalating per-commercial rates are masking a new reality: Since the 1984 Olympics, which earned a healthy profit, the higher costs advertisers are willing to pay are not keeping pace with the escalating costs to produce and host the events.

And, earned media through disruptive, ambush marketing campaigns is generating the same, if not more, media exposure as official sponsorship.  During the London Olympics Games, BMW supplied official cars, Coke was the only soda available, McDonald’s was the only restaurant allowed to sell french fries, and ATMs we all switched to VISA machines…and with all that (and more) corporate sponsorship revenue, only 40 per cent of the cost of staging the games was covered by advertising.

More and more brands recognize the opportunity to newsjack these events and often capture as much attention – if not more – than those brands dishing out the huge bucks.Examples of current trends vs. trend currents are outlined in Influence Marketing: How to Create, Manage, and Measure Brand Influencers, a book that Danny Brown and I released with  Pearson Publishing in mid-2013.

Too many businesses have focused their efforts on current trends, which in this case is the race to produce overly expensive commercials and sponsorship programs. They might be wise to focus on the undercurrent of change in how consumers and marketers view  and engage in advertising.  A dramatic shift is underway that will change the very nature of how event sponsorships will work.

Case in point: During the 2012 London Olympics, millions of online spectators were actively engaged in digital marketing campaigns produced by some of the world’s top brands.

In the days after the Olympics, that audience was asked to vote for their favorite Olympic brands. Four of the top 15 companies chosen (Nike, Pepsi, Burger King, and Google) were not official Olympic sponsors. Each successfully used social media and other digital channels to aggressively promote Olympic-inspired media.

The public doesn’t maintain the same indignation of the IOC and other event producers. Rather, they revel in the wittiness of Oreo, Nike, Zippo, and other brands and reward them with social media amplification that’s more valuable than any “official sponsor of…” tag line. So before you budget your next sponsorship campaign and expense, consider whether you’re following the current trend or the trend currents and where the market is moving.

Are the increasing per-minute advertising rates masking the trend currents in the world of sponsorship advertising?  Share your thoughts in the comments below.