Instagram announced this week that it will open up the advertising flood gates to businesses seeking access to its 300 million monthly users.

The illusive Instagram ad, which previously required personal contact with an Instagram sales person, lots of advance planning, and large budgets will soon be less, well, illusive. Using 3rd party advertising apps, marketers and adverting agents will soon be buying and managing advertising in the same manner they do on Facebook, Instagram’s sister network.  Further, they will be able to do so through a single interface instead of being forced to flip through different devices. It’s this cross-platform integration that makes this news all that much more interesting for marketers.

As reported by Business Insider, the Instagram Ads API is the latest in a series of moves the platform has made to start opening up the money jets. Back in June, alongside announcing the API test, Instagram announced that all of Facebook’s ad-targeting tools will be opened up to Instagram advertisers. In the same month it also launched “Shop Now” buttons and other messages for advertisers to link outside the app. And earlier this year Instagram introduced “carousel ads,” allowing marketers to fit more images into one single ad.

This is truly major news; Instagram’s users share over 70 million photos and videos each day. Further, the majority of users are 16 and 24 years old (41%), the mecca of target audiences for advertisers (35% of users are between the ages of 25 and 35).  The value of Instagram’s audience is undeniable, a fact that was not lost on Facebook, which purchased the social media network in the spring of 2012 in a deal valued at over a billion dollars.  [Cue  Dr. Evil soundbite…]

Reaction has been swift; “marketers ruin everything” seems to be the most common sentiment among users and pundits. The new advertising rules on Facebook have been drawing similar criticisms, both for the increasing number of paid posts showing up in peoples’ news feeds and its inaccurate targeting.

Facebook has also been under attack for its “double-dipping” advertising policy when it comes to business pages. The social network asks businesses to increase follower counts by purchasing Facebook ads but then throttles the business’s posts so that less than 5% of the followers earned organically or through paid advertising actually see the business’s posts. You want to get your message to those followers you paid to acquire? No problem, give Facebook even more money and they’ll gladly oblige.

Few consumers will condemn a social network that is offered free of charge to users for attempting to make money through inline advertising, yet most will jump to criticise marketers for doing a poor job executing those campaigns or the networks for intrusive and irrelevant ad placement.  Consumers accept advertising as a necessary evil in their social engagements but are also quick to ignore campaigns and ads that become too intrusive. In fact, a study by Adobe and PageFair found that the number of people using blocking software, for example, rose 70 per cent last year in reaction to the increasing number of ads being shoveled at us online.

Consumer opinions may not matter; analysts predict Instagram’s new advertising API to be a windfall for the social network.  EMarketer suggests that Instagram will earn almost $600 million from advertising in the next year.

To Instagram’s credit, they have found a way to make their ads less obtrusive than those found on other digital platforms including news sites, YouTube, and Facebook. There are no “page take over” ads (yet), no forced viewing of advertising video content (yet) as seen on Google, and no auto-play of videos from paid posts (yet) as seen on Facebook.  Yet.

Instagram’s “swipe to view” posts are effective ads in that the user does not see any additional content or calls to action (CTAs) until they choose to swipe left or right on an image. 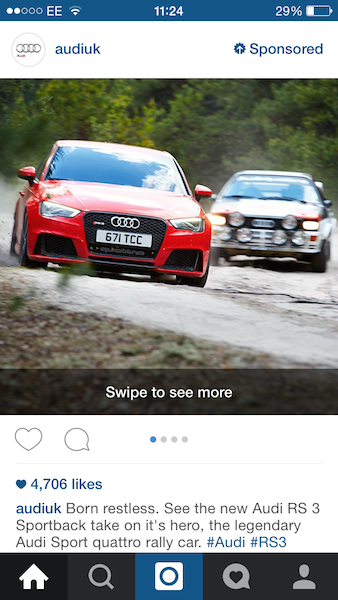 The key for Instagram and marketers alike will be to ensure that their targeting algorithm and content mix are bang on. For example, my Instagram posts (and those of the people I tend to follow on that network) are predominately cigars, single malt whiskey, and Liverpool football club. If sporadic advertising within my Instagram stream introduced me to Cigar Aficionado’s latest article or Laphroigh’s latest whisky, I’d most likely welcome the posts.

If, on the other hand, the network follows Facebook’s lead and presents advertisements for cheap rum or Middle East travel destinations (yes, that happened), Instagram and I may have a short term future.   Worse, if they co-mingle usage data among social networks and present ads on Instagram based on my usage pattern on Facebook or other networks, Instagram and I (and I suspect many others) will plan a “conscious uncoupling” with the social media giant.

What are your thoughts? Will the increased advertising soon to be seen on Instagram hurt its popularity?